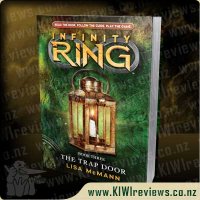 Disclosure StatementFULL DISCLOSURE: A number of units of this product have, at some time, been supplied to KIWIreviews by Scholastic (NZ) or their agents for the purposes of unbiased, independent reviews. No fee was accepted by KIWIreviews or the reviewers themselves - these are genuine, unpaid consumer reviews.
Available:
February 2013

Dak, Sera, and Riq return to the United States and walk right into a deadly trap. The year is 1850, and the nation is divided over the issue of slavery. In these dark days, the Underground Railroad provides a light of hope, helping runaway slaves escape to freedom. But the SQ has taken control of the Underground Railroad from within. Now Dak and Sera are left wondering who to trust... while Riq risks everything to save the life of a young boy.

Read the book. Follow the guide. Play the game.

The series has changed a lot since it first began and I suspect the episodes may have been a part of this but I am not sure because I have not been able to play them yet. While the first book was suitable for younger audiences the next 2 were only ideal for more mature readers because they are more active and might be too disturbing for under 10's. However for the older children this book will be fantastic! No other series or book has been able to be similar to the 39 Clues and yet be different and still equally impressive.

This book is more... interesting than the first 2 books and it is more emotionally/ethically active such as how black people could be snatched off the street and sold as slaves. The story is set in 1850's during the periods of intense slavery in America. The characters are rather the same and the local historian is cool, Riq's ancestors are fun and I enjoyed all of the characters. The lantern on the cover was cool and had a strong relation to the book.

The series had lots of historical information in the books and this fact makes the book interesting and realistic while still keeping the books fun and action-packed. The map tells you about the next on-line mission, your goals, your enemies and your allies. It gave me lots of information about ancient Japan. I like how the price is kept at a bare minimum and isn't too costly. The price value is fantastic and will give more people opportunities to buy this fantastic book. Personally I love this book because it so similar to the 39 Clues series yet it is different and still fun to read. Nice reading everyone!

Wow, the Infinity Ring series has really gotten more interesting since it began, it has gone from being suitable for kids 10 and over to being about 12+ as the books became more active. the story started well, although I was unable to play the mission for book 2 and since the books and missions link together the beginning got a tiny bit confusing in places. I found the cover rather cool, the lantern looked rather 19th century-ish, but it took a bit of reading to find out how the lantern related to 19th century America.

The historic facts seemed pretty accurate, in fact I don't think of this book as a piece of fiction, but rather a fun little history lesson, or a book of info seeds that inspire research. I noticed that Riq got separated from Dak and Sera in this book, and Dak got separated in the last book, it makes me wonder if the same thing will happen to Sera in the next book, I CAN'T WAIT TO FIND OUT! I found the characters quite cool, the historian was a cool guy, and Riq found some of his ancestors in this book, they were great too, I don't think I have a least favorite person in this story.

The "Art of memory" puzzles were good, the first one was pretty easy to solve, but the other one was quite a tricky one. I have no problems with the story at all, it was a very cool book for me to curl up and read when I wanted a bit of a written adventure. I think that this book is a good value for money, it is certainly not a rip-off, I can tell you that! With all aspects considered, I would say that this is an adventure book not to be missed, I am sure that you will find it a real blast. Happy reading!

Twelve-year-old Cassi Whelan and her dad have just moved into a repaired house on the edge of Christchurch's Red Zone. Although Cassi was only four when earthquakes decimated Christchurch, her memories still haunt her. An obsessive runner, she finds the wide-open spaces of the cleared Red Zone suit her perfectly.

However, she becomes suspicious about strange comings and goings at the broken-down house next door. A chance meeting ... more...