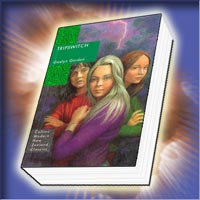 Disclosure StatementFULL DISCLOSURE: A number of units of this product have, at some time, been supplied to KIWIreviews by HarperCollins or their agents for the purposes of unbiased, independent reviews. No fee was accepted by KIWIreviews or the reviewers themselves - these are genuine, unpaid consumer reviews.
Available:
June 2004

'You are not without power,' the voice tells them. But what powers do Jocasta, Flora and Cilla have, and how can they harness them to escape their Aunt Lureene?

The more the three orphaned cousins discover about their cruel aunt, the more secrets they unearth, and the more horrified they become. What will happen to them if Lureene's ultimate plan succeeds? Would Lureene really sacrifice her own twin sons for power? And what is it the girls possess that Lureene wants so desperately?

They must find find the answers before it's too late.

I have long held an interest in the Wiccan arts, and the mythos that surrounds the 'modern witch' and their practices. With movies such as The Craft and Practical Magic, and the ever-popular TV series Charmed bringing more public notice to the Wiccan way, it is interesting to see how people react.

There are those that scream 'Satan!' on the sheer principal of the issue, then there are those who actually THINK FIRST and investigate, explore, and try to understand first. Gaelyn Gordon was obviously one of the latter.

This book, republished posthumously as a Modern Classic, is a bit like a playground slide; there's a long, slow climb and near the end, it all suddenly falls together and ends. If I had a complaint it would only be that the story could have easily been extended to give a less abrupt wrap-up. Good things should take time, for how better to enjoy a good thing, than to enjoy it for a while?

Overall, I was quite impressed with this book. As someone who has experienced the Witch Culture first-hand, I was taken with the accuracy Gaelyn put into this story. Though there is some controversy as to whether you need three-for-a-triangle, or four-for-the-corners to have a power-group, it was interesting to see her twist by making the girls 'cousins', instead of the more commonly accepted 'sisters'. And the little-known requirement of the braided hair binding at heads and hands to focus and share power was highly pleasing. I like it when the esoteric stuff gets included as well.

A great story, from a great author who's skill will be sadly missed.