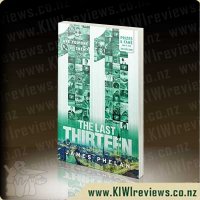 Disclosure StatementFULL DISCLOSURE: A number of units of this product have, at some time, been supplied to KIWIreviews by Scholastic (NZ) or their agents for the purposes of unbiased, independent reviews. No fee was accepted by KIWIreviews or the reviewers themselves - these are genuine, unpaid consumer reviews.
Available:
February 2014

We continue our adventures with Sam and the rest of the Dreamers in Eleven, the third book in The Last Thirteen series. Sam is a Dreamer - he has true dreams and is prophesied to save the world from unimaginable horror with twelve other true dreamers, who are all 15-16 year old kids. The last book ended with a cliffhanger where Sam is surrounded by German Guardians who have turned traitor.

The German Guardians are gotten rid of quickly and easily, with Sam performing some physics-defying stunts on his scooter and we're soon off adventuring to exotic locations with Sam and his friend Xavier, who is one of the Last Thirteen. Xavier's had a dream which takes the duo to Berlin, where they easily fool adults into thinking that they hold PhDs, with Xavier posing as his own father, and steal a vital clue into the mysteries of the Last Thirteen. Some of the characters are far better written in this book though there are one or two that I find more irritating this time around.

I liked that the world has finally grown and a lot of the mysteries surrounding the Professor, the Enterprise and Xavier's father have been cleared up. It's also really good that they talk about nature vs. nurture (a topic I always find interesting). This book seems a little too convenient at times, which I can kind of understand due to the target audience but it could have been a tad more complex. The majority of dart guns also gives me pause (all the shooting that none of that messy blood and dying) because in a real race to save the world, people will be hurt.

Overall, the world James Phelan has created is shaping up well, there's room for improvement but it's shaping up to be a rather fun series.

I had barely put the second book down before I found this one in my hand, Book 12 had left me on such an interesting cliff hanger I couldn't wait to find myself lost again in the race of the Last Thirteen. And lost I was I sat and read the book page after page losing track of time as there was never a moment I got bored or felt that I might like to put the book down for a while. The action begins from page 1 and doesn't stop throughout.

This time we see Sam visit Berlin. discover another one of the Last Thirteen in his own school friend Xavier and uncover more pieces of the puzzle of the Last Thirteen. Again we see him come up against the Agents of the Enterprise and against Solaris himself but the plot just continues to get deeper and deeper as we find out more of who is working with who and who is a traitor. Sam finds himself in a lot of danger in this book and again we are left on a cliff hanger uncertain how Sam is going to get himself out of trouble once more. It's going to be a very hard wait for the next installment!

I quite liked how this book was set out so we could get to know the characters seperately as each of the chapters would focus on a particular character. I have began getting to know Eva more and more I really like her character and would love to see how she is going to be helpful in the Last Thirteen as I just know she must have a lot to offer as she seems like such an important character. I also love how we are getting to know Sam more and more and seeing his potential grow and his ability to true dream get stronger and stronger.

I am quite hooked on this idea of Da Vinci leaving some sorts of clues or objects for the last thirteen to find and uncover it really is gripping to read, sort of like a Da Vinci code for adolescents. Again the book has left me with lots of questions and very eager to get my hands on the next book I think this is a series I am going to have to read from begining to end as I couldn't imagine not finding out if the whole of the prophecy is fulfilled.

I found this book better than "12", and I once did some research on Berlin, namely it's history, so in some ways this made the location of the main storyline far more enjoyable. It is now a fact as this series continues, the collective storyline becomes far better. The book was rather active, I wasn't bored at any point during the book, but there were a few times where there were some good cliff-hangers which were formed by exciting parts which were temporarily cut short by the change of which character the chapter revolved around.

The layout of the book was good, some chapters were centered on Sam, others on different characters, and some even containing the nightmares of the characters. This layout made the book easy to read, and I was easily able to distinguish who the 3rd-person perspective was focussed on, and whether or not the scene was a dream or real, which was something that was a bit hard to find in some books. The mysteries which were solved and formed in the book were really quite amazing, and they make a smooth transition from one book to the next, while some books can be easy to understand even if you haven't read the one before it!

Due to the high level on enjoyment which could be found in this book, I would be happy to read this book again at some point if needed. I lost track of time easily, mostly because it was a good book to get lost in. Overall, I have got to say that I am really happy with how this series is going, and I can't wait to see book 4 come out!

The second riveting book in the fast-paced Black Spiral trilogy.

Back from Germany and the assignment that went horribly wrong, Violet doesn't know who to trust:
It's fortunate for me that the Foundation staff can't read my thoughts... If they could read my thoughts, they'd never let me go. I'd be a liability, and I know what happens to liabilities.