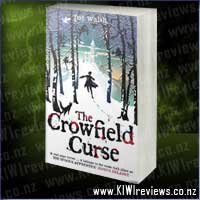 Disclosure StatementFULL DISCLOSURE: A number of units of this product have, at some time, been supplied to KIWIreviews by Scholastic (NZ) or their agents for the purposes of unbiased, independent reviews. No fee was accepted by KIWIreviews or the reviewers themselves - these are genuine, unpaid consumer reviews.
Available:
January 2010

It's 1347 and fifteen-year-old Will, an orphan boy, lives at Crowfield Abbey. Sent into the forest to gather wood, he rescues instead, a creature from a trap - a hob, who shares with Will a terrible secret. Somewhere in the forest behind the abbey where he lives, is a grave. And buried deep in the snow is an angel. But how can an angel die? What has it to do with the monks of the Abbey? When two hooded strangers arrive at Crowfield asking questions about the angel's grave. Will is drawn into a world of dangerous Old Magic.

"The Crowfield Curse" was short-listed for the Times Children's Fiction Competition in 2008. This is a stunning debut novel and the first of a two part series.

Will is fifteen; an orphan in the Crowfield Abbey who works hard for his keep. When he discovers an injured hob in the woods and brings him home, everything begins to change rather rapidly. The Crowfield Curse is a well-written, faced paced story for young adults which very much resembles the front cover in mood. I found myself almost shivering with the cold, colourless imagery of the Abbey and surrounding woods.

This book is a very well-executed blend of realistic 'middle ages' environment and traditional 'otherworld' characters. I am very much looking forward to reading the second installment and seeing Will finally leave the Abbey and pursue a less frigid path.

I would recommend this story for older children, perhaps 12 - 15 because it is quite a dark story with some gore and animal death (fairly graphic). Definitely worthy of its shortlist in the Times Children's Fiction Competition, The Crowfield Curse was an interesting and memorable story which left me wanting more.

Hannah is a soft-hearted, strong-willed girl from the tenements, who supports her family as a hotel maid when tragedy strikes and her ... more...