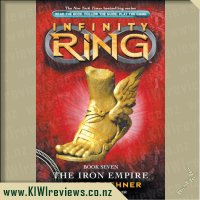 I have missed quite a bit of the Infinity Ring series, and since the end of book 6 I have been in suspense over the many possible outcomes of this book, the conclusion I have long been waiting for, the day when Dak and Sera (and Riq of course....) go back to the days of Aristotle to fix the prime break, oh, the many plots I imagined to get me through the anticipation... Before I go on about the book, I wanted to say that I found the game episode which came with the book was very underwhelming, and full of overkill moments, and the episodes have become increasingly boring, just as a point of feedback, though.

The storyline of this book was quite fun to read, it actually gave me quite a thrill, a quality I find hard to find in books of this category nowadays, so I am very happy with the excitement factor of this book. I found the plot to make sense, there were no major plot-holes or contradictions which ruined things, everything flowed smoothly. There was one part where thing DID get a bit interesting, I can say without giving away too much that there is one point where the 3 young time travellers have to double back to a point in the past where they already were, but they went to a different place, which stopped the two versions of each traveller meeting each other and creating a paradox, which was a smart use of temporal logic.

I think the story was resolved well, although there is a loss which actually made me quite sad, so just a heads up about that. Although, the fact that the story resolved with a happy ending does make me curious about how book 8 is going to turn out. The price is good, although I have seen some places online where is is worth more, but I think that $18.00 fits the book's value within fair parameters. To sum up, I think that this book is a great one, and made a smashing conclusion-of-sorts for this series, and I also hear that there may be another Infinity Ring series coming out....... To be continued!