« Ratchet and Clank: A Crack in Time review

The Last of Us review 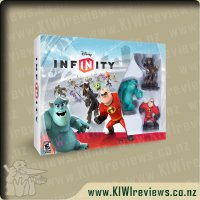 In Disney's most ambitious video game initiative ever, Disney Infinity introduces an all-new game universe where a spark of imagination unlocks a fantastical world where players have unprecedented freedom and endless opportunity to create stories and play experiences starring the beloved characters from Walt Disney and Pixar Animation Studios' most popular franchises.

For the first time, players will place real-world interactive figures - characters, power discs and Play Set pieces - on a device called the "Disney Infinity Base" to activate original, story-driven adventures in the game worlds, also known as "Play Sets," of "Monsters University," "Pirates of the Caribbean" and "The Incredibles." In each respective "Play Set," players will take on the role of a variety of popular characters including Sulley, the naturally gifted scarer; Captain Jack Sparrow, the sword-wielding double crosser; and Mr. Incredible, one of the world's greatest crime-fighters, and battle enemies, solve challenging puzzles, overcome obstacles and complete a variety of other unique quests.

As players advance through each adventure, they will collect characters, vehicles, upgrades, gadgets and more which they can save to a virtual "Toy Box." At any time, players can access their personal "Toy Box" and use the items to create one-of-a-kind Disney adventures featuring any combination of characters, environments and items across all franchises. The possibilities are endless and players are only limited by their imaginations.

Features:
•  Unprecedented Creative Play - Featuring a virtual "Toy Box" and a vast open world environment, players can create their own stories and customise their adventures combining characters, environments, gadgets, vehicles and more. The possibilities are truly infinite as Disney will add new additions from the company's vast library of entertainment properties.
•  Infinite Storyline Possibilities - Disney prides itself on its storytelling culture and for the first time ever, Disney Infinity will put the story creation into the hands of consumers. Players will be able to create their own adventures in an open-world environment and will give players unprecedented freedom for creative play.
•  Multiple Franchises Across All Platforms - Disney Infinity introduces an all-new universe, featuring a toy-inspired art style where multiple Disney franchises and characters can exist and interact in one game and across Xbox360, PS3, Wii, Wii-U, PC and online, as well as on smart devices including tablets and mobile phones.
•  Interactive Figures Activate In-Game Adventures and Customisations - Disney Infinity will initially introduce a line of 40 collectible interactive figures - characters, Play Set pieces and power discs - that allow players to expand and customise their play experiences. Over time, Disney Infinity will release additional characters and "Play Sets" and this platform will constantly evolve.
•  17 interactive character figures allow players to experience a variety of their favourite characters in each "Play Set" and in "Toy Box" play
•  3 Play Set pieces that add new Disney and Disney Pixar "Play Set" locations
•  20 power discs enhance environments, add gadgets and more
•  Co-op Multiplayer Action - Disney Infinity supports 2 player co-op play in structured adventures and up to 4 players in "Toy Box" mode.

When I saw this coming out I thought that it would be a good game for my children, so we bought this for the kids as a Christmas present. So far it has been a good investment.

With the starter pack you get the disc, character base, three characters (Mr Incredible, Captain Jack Sparrow and Sulley), the play set (needed to play in the characters world's) and a token (which gives you things such as backgrounds in the Toy Box). This is a great starter pack for getting used to the game, my only gripe about it is that the box doesn't state that if you are playing with two people and both want to play in one of the worlds, you both need to be a character from that world.

In the Toy Box, you get to run around, defeat a few enemies and build to your hearts content. As a character you can then do little games (such as paintball!!!!) and you can be from different worlds, no worries. Once in a world you get tasks to do. In The Incredibles you help put out fires, rescue civillians and defeat Syndrome. In Pirates of the Caribbean you help free crew members, find treasure and so fourth. You can explore the world while you are at it.

My four year old just has fun trying to move around the game at the moment, full of excitement when she manages to destroy something or hit something. My six year old has great fun and whilst he isn't into doing the missions yet he has a tonne of fun simply running around defeating his enemies. My husband and I had some time mucking around on it, completing some of the missions and had fun, so a good game, plus it's a great one to play with the kids.

This is a fun game and we really enjoyed it.

Forza Horizon is an open-world game based around a fictitious festival called the Horizon Festival, set in Colorado, USA. The game incorporates many different gameplay aspects from previous Forza Motorsport titles, like the large variety of cars, realistic physics and high definition graphics. The aim is to progress through the game by means of obtaining "Wristbands" by driving fast, destroying property, winning races and other driving antics. ... more...