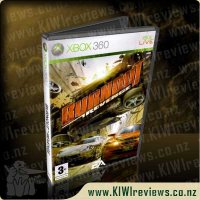 The sequel to 2004's racing game of the year, Burnout: Revenge straps gamers into the fastest, most dangerous racer on the road. Fight dirty or go down in flames - the only rule is complete automotive anarchy.

Built for unprecedented destruction, Burnout Revenge challenges gamers to exact their revenge on rush hour traffic, vindictive rival racers and anything else that gets between them and the finish line.

And when gamers are ready to take their rage on the road, a massive suite of online modes and features open up endless possibilities to slam, shunt and stonewall new enemies all over the world. Happy hunting!

Of all the Burnout games, this one, Burnout Revenge is the only game from this series that I enjoy. Yes, it is just another racing car game, but considering it is the only car racing game that I like.... Pretty much speaks for itself.

There are missions to complete, as you complete, they naturally get harder, and as they do you unlock new cars which are either lighter, heavier, faster, slower or built more sturdy.

You have your basic race mode, you have the Grand Prix, then there are the races where you need to be as far out ahead as you can be as each time the clock reaches zero the last place player is out for the count. There are levels where you get bronze, silver or gold dependant simply on how much damage you to to vehicles. And so on.

My favourite aspect of this game, which isn't found in the other Burnout games, is that you can crash into cars driving in the same direction as you, suffering only minor damage (which does build up slowly over time) instead of suffering a crash that kicks you out of the game.