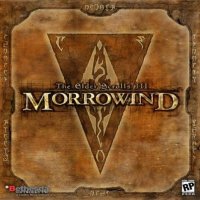 The Elder Scrolls III: Morrowind is an epic, open-ended single-player game where you create and play any kind of character you can imagine. Be the noble hero embarking on an epic quest, or an insidious thief rising to leadership of his guild. Be a malevolent sorcerer developing the ultimate spell of destruction, or a reverent healer searching for the cure to a plague. Your actions define your character, and your gameplay changes and evolves in response to your actions. Confront the assassins' guild, and they take out a contract on you. Impress them, and they try to recruit you instead. No two sagas are the same in the world of Morrowind.

Players can choose to follow the intriguing main storyline, or set off to explore the huge province of Morrowind and the many interesting people and exotic locations it contains. Vast cities and remote villages dot the landscape, each with its own unique look and feel. Hundreds of quests and adventures await as you interact with characters and learn more. Regardless of whether you play a murdering assassin or a noble knight, the game holds endless possibilities and allows you to revisit the main storyline at any time.

With Morrowind, the unparalleled Elder Scrolls character system is coupled with an exponential increase in the world's richness of detail and level of visual splendor. Utilizing the latest in 3D technology, Morrowind will feature hyper-realistic textures and polygon counts, real-time shadows, vast landscapes, skeletal based animation, and a complete weather system.

Gameplay is further extended with the inclusion of The Elder Scrolls Construction Set, which will be included with the game. This powerful tool is being used to create the entire game, and will also allow players to modify and add to Morrowind in any way they see fit. Change character or creature attributes and skills, introduce new weapons or dungeons into the game, or create entire new worlds to explore. You'll be amazed how simple it is to use, and astounded by how much bigger it makes an already immense game universe. Players can easily swap files and add or delete them from their game with the click of a mouse, ensuring that no file can ever damage your game or change it permanently.

Morrowind is the latest addition to ‘The Elder Scrolls’ series by Bethesda, and while it has taken a huge leap forward from previous chapters, it still has some none to subtle problems.

GRAPHICS
The environmental graphics in Morrowind are outstanding, from the day/night cycle to the various weather effects. The most notable is the water effect which is spectacular, especially when the sun is reflected across it. These things come at a price however and you’ll need a fairly new video card to appreciate them fully.

On the flipside, the spell effects are pathetic. It looks like they threw in some placeholder graphics but never came back to finish the job. When I create a magic wielding tower of death I want to be able to call down fiery destruction from the heavens to vaporize my enemies, not singe them with some wimpy looking fireball. Graphics convey to the user the perception of power, something that the spell effects lack.

GAMEPLAY
Unlike most RPG’s that are linear in progression, Morrowind has the sweet scent of freedom.

Character creation is done by selecting a race and then either choosing a preset class, or creating a custom class where you select the skills that will be important to your avatar. Character advancement is achieved by increasing your skills through use, once you’ve sufficiently increased your skills you’ll gain a new level.

On the downside, I believe it’s too easy to level your character and gain early access to powerful items, power gamers may like this but I found it simply saps the enjoyment out of the game.

Exploration is free and unrestrained, there are no limits on where you can go and when, you could run around the countryside in your underpants if you so wish, although I’d not advise it as the locals may think you’re a bit weird.

Melee combat can be handled in one of two ways, you can control the swing of your weapon using the mouse, or you can simply set combat to use the best attack. I personally prefer the later.

Hand to hand combat is also supported but its usefulness is limited. I really would have liked to have seen unarmed combat fleshed out more since it could have opened up so many possibilities, especially for stealthy characters.

Sick of playing the goodly hero, why not cross over to the dark side and become a vampire, terrorizing peasants is always fun, but keep your eye on the time or you’ll have a really bad day.

The nastiest problem I encountered was a random crash to the windows desktop for no apparent reason. The problem seems to be a long running one that has yet to be fixed. The interface also bakes my swedes, it’s poorly thought out and is slower than a dead man running, even on a high end system.

SUMMARY
Even with its problems Morrowind is still a good game, although it could have been a truly great game, maybe next time.

It couldn't be simpler!
Just nine pieces...yet so tantalisingly frustrating!

Simply place the 9 tiles in a 3 x 3 square to correctly create 12 ladies on the inside of the grid. Be sure to check that you have properly matched the top and bottom in the correct colour for each completed lady.

Sides facing the outside of the grid do not matter.

Challenge: Can you solve in 25 minutes?