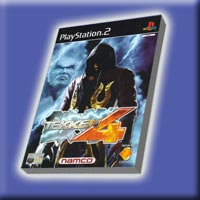 But Heihachi will fight to the death...

Tekken 4 is one of the coolest fighting game I have ever played and trust me I have played a lot of fighting games! what I do like a lot about it is that tekken still has the original characters from the previous tekken games like Jin and Yoshimitsu, and they bring in new fighters as well.

The graphics have really improved since the first game, I have played this on my PlayStation 3 also and the picture is pretty much the same, mind you I played tekken 5 not tekken 4, but the picture quality and clearness is pretty close to the same obviously the ps2 picture is a little less clear as ps3 but it still pretty awesome.

The standard fighting moves is pretty simple but.... the combo's are a different story, just for an example: You would have to move your fingers from Triangle to Circle then back again 4 times.... sometimes 6! I was playing this game with my mate when I did that combo......IT WAS EPIC!!! and I won. I like tekken 4 on ps2 but I like tekken on ps3 more.

Beat-em-ups have been around as long as games consoles have. This game is no exception. The big 'improvements' of this particular strain of 1-on-1 combat seem to be hyped graphics, a few extra bits thrown into an already drawn out plotline mode, and some extra 'special moves'.

Other than that this game really didn't have a whole hell of a lot of appeal for me. It snagged me for an hour while I worked out some of the 'special combo' attacks, but the glamour rapidly faded. I will stick to playing SoulBlade (a good ol' classic PSX game from the first days of the original PlayStation console), at least that had swords .

However, since it is now Platinum Release, it's fairly good value for money for those of you who really dig this sort of brutal 1-to-1 violence.

In Disney's most ambitious video game initiative ever, Disney Infinity introduces an all-new game universe where a spark of imagination unlocks a fantastical world where players have unprecedented freedom and endless opportunity to create stories and play experiences starring the beloved characters from Walt Disney and Pixar Animation ... more...