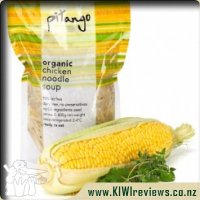 Disclosure StatementFULL DISCLOSURE: A number of units of this product have, at some time, been supplied to KIWIreviews by Pitango or their agents for the purposes of unbiased, independent reviews. No fee was accepted by KIWIreviews or the reviewers themselves - these are genuine, unpaid consumer reviews.
Available:
at selected quality supermarkets

A warming classic soup made with pieces of chicken, corn and noodles.

I left this pitango meal for last, as it looked a bit displeasing to the eye, I'm not going to butter this up, but I got a bit sick looking at it before it was heated. After heating this meal, however, the meal looked a lot better, and didn't taste that bad, either. The soup was a bit bland, the vegetables were delicious, and the ckicken had some flavour as well, but there wasn't THAT much flavour. I decided to try a small bowlful of the soup first, to avoid too much of it going to waste if it was too displeasing to my tastes, and the soup was filling enough just with that small amount.

My dad had tried this soup previously, and said that he mixed his sachet of soup up until it was all even. I hadn't done this, and so the bowlful that I had was mostly water, which, however, wasn't that much of a problem. I think that the soup had a good mix of chicken meat and vegetables, and the vegies actually had a good mix of flavours, as there were a combination of corn and what I think is celery, so that bit I enjoyed. My dad gave me a suggestion as to how to overcome the blandness, I used some Italian herbs and spices, and they improved the taste massively.

The price is great, as most prices do, this price matches the value of the product perfectly. I love the fact that this soup is mostly fat free, it means that it's a bit more healthy. I have never tried chicken noodle soup before, apart from the cup-o-soups, so I haven't been much of a fan of this stuff, so this soup was a good change. Apart from the blandness, this soup was rather nice, a bit better than I thought it would be.

I am HUGE fan of Chicken Noodle soup, have been since I was too young to know what it was. Having tried a lot of versions in the years, this was one I was very keen to trial, and I am sorry to say it wasn't one that impressed me overly. I found it to be far less flavoursome than I was hoping for, and a little gluggy for my tastes.

However, this packet serves 2 portions, and I had only cooked a single portion's worth, so with the leftovers and the entire second portion, I was able to experiment and see what else I could do with this. The first thing I did was to add some cream, and some extra chicken meat from a roast chicken we had bought from the supermarket earlier in the day for lunch. Adding a generous grind of fresh black pepper and some sea salt also lifted the flavour, but for those watching their sodium intake you can easily skip the salt and try something else, such as a touch of paprika - replace rather than enhance the flavour.

That solved most of the problem, but I still found it a little less than ideal for me, despite my family really enjoying the taste. The only thing we all agreed on though was the lack of visual appeal. From tipping it out of the packet right through to serving it up, this really didn't draw the eye the way it should. "Food is first tasted with the eye" - no idea who said that, but it's utterly true for me, so if a food looks unappealing, I'm not likely to even try it.

Overall, I can see how this would appeal to some, and how it could be a great base for a casserole or broth - throw it in the slow cooker with a pile of diced veges and some garlic and you'd probably have a real winner - but in it's 'natural state' this is one I won't be buying again.

I was really looking forward to trying the Pitango range and with four options in the fridge I went for the Organic Chicken Noodle Soup as a quick snack between my workout and heading off for an afternoon of kids activities. I did offer to share this with Miss Two but she wasn't at all interested so I poured half into a bowl expecting to have the rest later. This soup weighs 600g and has a serving indicator of serves 2. It can be heated in the bag by opening the bag and standing it upright. The bag (pouch) does sit well upright but I prefer not to heat in plastic so heated my single serving in a bowl. It heated in a couple of minutes and was delish! This soup is really thick and tastes really substantial and healthy. It is Organic and has no artificial colours, flavourings, artificial preservatives or numbers. Pretty perfect for my tastes actually.

Taste wise this was really good. I heated up the remainder and felt pretty satisfied having had the whole pouch. I am not sure I would normally have been able to eat a whole pouch, as I was pretty hungry, but I wouldn't rely on one pouch between two unless using it as a starter or serving with bread. You get what you pay for and as a quick and convenient and healthy meal this is great buy and I would definitely look out for it again.

I threw out the top strip that had the use by date but I think these last a few months in the fridge so they are good to have on hand. These are the sort of meals I would have had a lot of when single and they would be quite cost effective for one I should think. I would definitely recommend this and I look forward to trying more in the range.

On the weekend I opened this pack of Pitango soup for my lunch. The soup is a pale chicken colour, with some corn and noodles visible through it. The taste of the soup was quite peppery and I thought the texture was okay. I'm not use to proper chicken soup, so it took some getting use to the real ingredients. I did appreciate that it was real chicken though, as well as the quality ingredients involved.

I had a bowl of it, but my husband had already picked up a pie on his way home and my children are not soup eaters, so I had an extra serving sitting there. I had nothing sorted for dinner, so I decided to use the soup as an ingredient in dinner. Into the bowl of cooled soup, I mixed 4 free-range eggs, and some grated cheese. I didn't bother to add any extra seasoning s I felt the pepper would come through nicely. I microwaved the mix on and off for a few minutes, stirring every minute. This allowed me to get the egg almost cooked before pouring it into the quiche pastry and topping with cheese.

The quiche came out looking great. The flavour was a bit on the plain side, though the taste of pepper was definitely present. If I was going to make it again, I would have added some cayenne pepper, or spices and maybe more cheese. I found this soup okay, but it was a bit on the plain side for me. It would be the flavour I would be least likely to buy, but that's because I prefer a vegetable soup anyway.

When I think of chicken noodle soup I thing of being sick in bed with no energy to get up and my mother bringing some in to keep my fluids and energy up. As an adult I don't have the luxury of having my mother to play nurse when I am sick. Pitango's Organic Chicken Noodle Soup is perfect for times like this. All I need to do is throw it in the microwave for a couple of minutes and take it back to bed with me. The pouch I was given had two months left on the best before date so it would be worth keeping a pouch in the fridge for these days.

Having said all that I have been given this to review in November when I am perfectly healthy (which means I can taste it properly). It does feel strange having soup for lunch on a hot day. When I first poured it out of the pouch it appeared to have separated put once heated this wasn't as noticable. There was lots of very finely shredded chicken (the kids asked me what the tiny string was), noodles, and veggies. It was quite a watery soup but full of flavour. There was a lingering taste of garlic which would is great for those with a cold or flu. I really enjoyed the soup warm but as I don't often eat my lunch without disruption I can also voucher that it doesn't taste bad cold either.

I am sure to be buying this again whether it is for when someone in the house is sick or for a healthier and cheaper alternative to takeaways when I am in a hurry. Although the pouch serves two it would easily do Miss 5, Miss 3.5 and me with the addition of toast on a night hubby is working late.

Something a little different...

We have blended our manuka smoked salt with red & green peppercorns and added a good dash of Lemon Kelp. So you get a Lemon Pepper with the addition of Iodine from the kelp and a bit of the smoked salt flavour as well. Use as you would a Lemon Pepper - Customers tell us it's great on aubergine when barbecued.