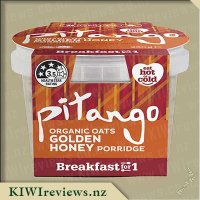 Disclosure StatementFULL DISCLOSURE: A number of units of this product have, at some time, been supplied to KIWIreviews by Pitango or their agents for the purposes of unbiased, independent reviews. No fee was accepted by KIWIreviews or the reviewers themselves - these are genuine, unpaid consumer reviews.
Available:
At selected supermarkets and retail outlets

When I saw that Pitango made heat and eat porridges I thought it was a bit silly given how there are so many porridge sachets out there. Then I thought about all the sugar the porridge sachets have in them and the fact you would need milk, a bowl and a spoon and realised this wasn't always the easiest for some people on the go. I knew that a Pitango product had to be healthier too.

I shared my bowl with Miss 7, the biggest porridge fan in the household. She was not a fan of the pumpkin seeds but I really loved them as a nice change in texture. We both found that the spork proved wasn't practical for eating something so runny and both grabbed a spoon from the draw. For a golden honey porridge it wasn't as sweet as either of us expected but we ate it without adding anything. I suppose we are just used to the sugar in a porridge sachet. I only allowed my daughter a couple of spoonfuls of the porridge as it was actually my breakfast and she had already had cereal. I found it was just the right sized serving for me.

This porridge would be ideal for those staying in a motel or that eat breakfast once the get to work. The price reflects the convenience, the quality and the organic ingredients but makes it expensive as an everyday breakfast.

In winter Miss 4 and I often enjoy eating something warm such as porridge for our breakfast, though we have found that we definitely prefer some brands and flavours over others, and that these really can be a hit or miss with us. I was really excited to see that Pitango has released a readily prepared porridge product as these would be great for on days when Miss 4 and I have to be at work before 7.30 which is typically the day which she requests porridge for breakfast, when I have no time to make it up OF COURSE!!! Popping one of these into my bag and just needing to heat it in the microwave for her would be ideal.

Following the microwave directions I prepared the porridge, which was super quick and also super easy. I removed the cardboard outer from the packaging and then placed the plastic lid loosely on top of the bowl and then microwaved on HIGH for 1.5minutes. At this stage I gave it a wee stir and then popped the lid back on loosely and returned the bowl to the microwave for a further 1 minute, simple! The porridge is made to be served in the bowl in which it comes in, with the handy dandy spork which is included, however as I was to be sharing this between Miss 4 and myself I dished it up into 2 separate bowls. The porridge to make it go further between the 2 of us I added some blueberries, banana and greek yoghurt to the top of it and then drizzled over some maple syrup.

The taste test... the porridge was thick and creamy just the way a good porridge should be, and the taste of honey was there, although I must be truthful and say I myself would have liked it to be a little stronger, however my addition of maple syrup did help with this! Sadly however Miss 4 and I weren't the biggest fans of the steel cut oats that were used as we much prefer finer oats in our porridge, we like the texture better. We both happily ate the rest of our bowls in saying that and I loved the added crunch which was given from the pumpkin seeds, Miss 4 again not the biggest fan of these and said she would have prefered to have raisins in there place.

While this product wasn't really for us I can see it being a hit with many others who need a quick and easy, wholesome breakfast on the run that is healthy, fast and filling, and which can be eaten either hot or cold. I would love to see Pitango produce some more porridge varieties which are made of finer oats as these would be much more suited to my family and probably something which I would really consider buying for us. Two of us shared a pot of this product - it was not quite enough to be a complete breakfast on its own, but I made some toast to go with it. I had previously eaten another variety in this range and had found it a very filling meal for one person so I was confident that a shared pot would still give both of us a reasonably sized helping.

On first tasting it, I found it was not quite as sweet as the other variety had been so I sprinkled over a teaspoon of brown sugar. My companion, however, thought it was quite sweet enough. It was already quite milky so there was no need for either of us to add any liquid. It was a very cold day so it was the perfect food - less than three minutes in the microwave and it was ready to eat.

The pumpkin seeds are a great addition. They are nicely crunchy despite being packaged in a semi-liquid medium, and certainly give an additional flavour boost to the product. There is also a slight caramel aftertaste, no doubt due to the golden syrup. We were both pleased to see that there are no artificial additives or preservatives so that what you get is a wholesome, tasty product that tastes home-made.

One thing we both realised as we were eating it is that the product is already fully prepared. It just needs reheating. So if you are in a hurry or are camping and away from reheating facilities, or even if there is a power cut, there is nothing to stop you from eating it cold straight from the packet. In fact, I remember eating cold porridge when I was a child at a time when the porridge was cooked the night before ready for reheating in the morning. Sometimes I could not wait, and as long as there was some sugar added, it really tasted fine! These days, of course, we are spoiled for choice as most breakfast cereals are already prepared so need minimum additional cooking time (if any).

The packaging is sturdy and designed to stand up to the odd bump. It is also easy to stack in the fridge - it does need to be kept cold so this is important when fridge space is at a premium. Since I have a chilly bin, I can take it away for a quick breakfast when I am travelling and know I can start the day with a hearty breakfast. It comes with a disposable spoon (the sort that thinks it is a fork) so I don't even need to find the cutlery first! These breakfast-for-1 varieties are smaller in size compared to the meal-for-1 (250 grams vs 350 grams), but price-wise it works out equal value for money (if not slightly in favour of the breakfasts). The breakfasts also come with different packaging; with a thicker, more solid plastic, and a tab you must break to be able to get the lid off (kind of like what you get on the large tubs of ice cream). This differnt style of packaging means that we don't need the plastic film over the tub, that the meal-for-1 varieties have, which reduces the amount of non-recyclable plastics (+1 for improved environmental awareness).

The directions were very easy to follow, but obviously some caution is needed. The directions are a guide, and will vary from microwave to microwave. As is the case with most heating methods, when you heat porridge, it will be from stable to overflowing in a matter of seconds. The initial 1.5 minute heat up went well, but after stirring, it only lasted 15 seconds into its final minute before it almost overflowed, just managing to avoid a mess, and losing half of my breakfast.

The meal comes with a spork, which makes it a very work-friendly food. No need for a bowl or cutlery; everything is included. That being said, it is a tiny spork. I would have preferred a larger one, or even just a spoon. The consistency of the porridge does lend it to drip out through the spork tines.

Now I don't know whether it was because I didn't cook it for the full minute the second time around, but the porridge had an interesting texture; thick, almost like brown rice. Ingredients-wise, the meal is very simple, and would be considered a very healthy option, with no added preservatives, and being a good source of protein and fibre. Flavour-wise I found it a bit lacking. The pumpkin seeds added nothing to the flavour, instead just adding a bit of a crunch to the texture, and tripling the time it takes to eat the meal (granted, eating slower, is meant to help eat in moderation as it gives the stomach more time to tell the brain it's full). The honey is very subtle, and adds a slight sweetness to the oats, but isn't as dominant a flavour as I was expecting.

For the price, it's still good value, and easy to prepare at work. It doesn't look the prettiest in the container, but definitely not something to turn your nose up at.