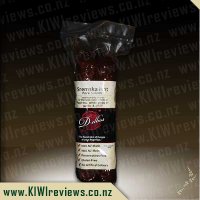 My entire family love hot and spicy foods so all were excited to get to try this out. I admit upon first receiving I was a bit put off by the look of this salami lol but I was pleased to see there was two salamis per packet and not just one like I originally thought or expected. Having two salamis meant that we were able to use one in a meal and the other as it was to try it out to get a real opinion of taste and texture etc.

So as a meal we decided to try 'one pot pasta', basically a risotto using pasta instead of rice. We had never tried one pot pasta before so were quite excited about it. It is as simple as picking your ingredients (anything from salami, sausage or whatever, spaghetti pasta, tomato, peppers, and anything else you want to throw in there). Put it all in the same pot, add enough water to half fill the pot and then bring to boil. Let it boil until the water is gone. sprinkle over some of your favourite cheese and serve. It took about twenty minutes to cook and was so good.

The flavour of the salami was absorbed into all elements of the meal givng it a a really nice flavour. I waa really surprised at how well the salami flavoured the entire dish. The next day we tried the salami as is cold. My youngest and oldest children loved it. Hubby heated it and had it with crackers and cheese and said it waa very nice. For my middle child and I it was much to hot and spicy. It seemed that the time it spent sitting in the fridge over night increased the hot and spicy taste and it was just far to hot for both my son and I. This surprised me as this particular child has loved all the hot sauces we have had for review but couldn't handle this lol.

The one thing I noted and really did not like personally was how extremely dense, heavy, and hard the salami was. It made it difficult to eat and I did not like it :( In a meal though it was good but still chewy though.

Hot and spicy is not my kind of thing and on a typical day I would just hand it over to my husband and walk away, but that's the great thing about being a reviewer, I can give things a try, that I usually wouldn't, without this big dent in my wallet.

It was easy to see, right from the get go, that this was going to be a hot salami, and as soon as we opened it we got this lovely orange gunk on our fingers, which was promptly washed off for fear of forgetting and rubbing of the eyes occurred. My husband and I both had a small piece each and he was standing there going 'huh?' whilst I was busy panting and shoving cottage cheese in my mouth. For us there wasn't much of a meaty taste as the spice overpowered it a bit.

Since I wasn't going to eat it straight, and my husband wasn't fussed either way, I decided to make a modified version of something I used to gorge upon as a teenager. I diced up some cucumber and some of the salami and then mixed them both into a big bowl of cottage cheese. The spice gave the cheese an orange tinge, but that was fine, both the cucumber and cottage cheese helped to cool down the salami and we were able to eat it.

My husband wants to eat this on his pizzas, not for me thanks. I don't see us buying this again as I didn't enjoy it (not just the spice but the flavour too) and my husband isn't fussed either way.

I have learned to be a bit more adventurous when it comes to spicy food so I was quite positive and excited about trying Delbos Sremska Hot. When I opened the pack, it was like I see the spice radiating out from it. My hands got covered in orange stuff which I imagine was the paprika and chilli. It was a little messy on the bench too. Perhaps I should have thought about using a plate or chopping board to open it onto. We can only learn from our experiences.

My husband and mother, both people who enjoy a spicy dish found it rather hot. In fact, my husband called it "severe heat". My mother thought it was at the higher end of the heat that she could tolerate but still enjoyed it. She said she would be more likely to eat it with other things rather than by itself. Funnily enough, although I found it hot, I was able to cope nicely and in fact, really enjoyed it. It did spoil my taste buds for trying anything with a lighter taste for a while though. I tried it with Nekta Kiwifruit Aloe drink and they went very nicely together. The Kiwifruit Aloe calmed my spicy mouth. I also tried it with some cold Sauvignon Blanc and thought that the flavours went perfectly together. Again it was calming. I didn't try it with the suggested red wine but I think that I I would still prefer a white wine with this one.

We thought that fruit would work nicely with the spiciness of the salami. The crisp crunch of an apple or pear would be lovely to go with the chewy spicy salami.

I think that care would need to be taken when choosing cheese or anything with a mild flavour to go with it as the Sremska Hot could easily overpower other items on a platter.

We thought that we would try a cooked version of the salami to see what we thought. We sliced up some pieces and put them into the pan to heat. We put different types of pieces of cheese (and one with avocado) on top. The blue cheese was the only cheese which stood out against the flavour of the Sremska Hot. Probably not a combination I would choose as being the best though. I found that the avocado and camembert produced a good texture to complement the salami. We enjoyed the taste and texture combinations. We also tried it in toasted sandwiches. Interestingly enough, it seemed that the heat came out even more when it was cooked this way.

Although we enjoyed this salami, it probably wouldn't be the version we would choose if we were faced with the entire range of Delbos. It is a little more spicy than I would normally choose.

Growing up on the Adriatic coast of Italy, known for its obsession with great food, Angelo Tredicucci learned the time-honoured skill of artisan pasta making.

The result is Pasta mia, a taste sensation of bronze-extruded pasta made from his family recipes, bringing the best of Italy to your table since 1994. Buon ... more...