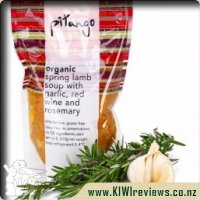 Disclosure StatementFULL DISCLOSURE: A number of units of this product have, at some time, been supplied to KIWIreviews by Pitango or their agents for the purposes of unbiased, independent reviews. No fee was accepted by KIWIreviews or the reviewers themselves - these are genuine, unpaid consumer reviews.
Available:
at selected quality supermarkets

A delicious soup made with lamb, vegetables and white beans, cooked in a rich lamb stock with red wine, herbs and spices.

Red Wine and Lamb soup. Hmm I must admit I waited the longest to try this one but how wrong I was. It has a very watery consistency but also so much flavour it was a great surprise. Throughout the soup is a rhubarb like texture that I loved and not being a wine drinker I was not looking forward to the wine taste but it didn't taste like wine at all just a really nice match up of ingredients that work together so well.

The portion size was really generous and it was very filling. There are 4 soups in the range I tried and this one is by far my number 2 favourite of them all. The price again for this range puts it out left of field for what I would spend on a pour and nuke meal but if you have not tried these before you should try this one at least. I had mine with simple toast and butter nothing special I just felt that being a watery soup style it needed toast to dunk in and soak up.

Garlic, red wine and rosemary. In a roast or in a soup, these flavours were made to go together.

I had been putting off eating this as the thought of a lamb soup with red wine didn't really appeal. How wrong I was! As soon as I opened this pouch I realised that this wasn't just an ordinary watery soup, this was going to be yet another Pitango delight. It was immediately apparent that the soup was very thick and was going to be a proper meal. I pured half into a bowl as I was fairly certain this was going to be a two serving meal. At 600grams this is reccomended at two serves. The soup heated in a couple of minutes in the microwave and was ready to eat. I would reccomend this with some lovely crusty bread but having none on hand I had some unimpressive rice crackers to dip.

This soup is just packed with goodness. It is really thick and full of very small chopped vegetables. The lamb is in the very fine strings which is definitely better than chunks but I wasn't so keen on the strings. That aside however the flavour is amazing. I absolutely loved it. Even miss two enjoyed a few spoonfuls. What else I loved about this is that it is a soup that can be shared between two and with a lovely bread and some salad makes a devine meal. I would definitely buy this and as it is gluten free it meets the needs of our family. This is probably the best preprepared soup I have eaten and I have no problems reccomending it.

OMG this was amazing! I found there was plenty of flavour, plenty of meat, and so many uses that sprang to mind! Wanting to really play with this one, I first had a 'half-portion' - about a quarter of the packet, just 'as-is' and after the first spoonful, it was VERY hard to resist the urge to empty the entire packet into the pot and plow it down. Still, I held strong... somehow.

Putting another quarter-serve into the pot, I added in some parboiled and diced potatoes, carrots and some lightly-boiled peas and corn, then simmered it for a little while to reduce it down to a thick gravy. This was then used to make some small single-serve pies - I got four pies out of it, just. This meant the whole family got to try them, and all agreed that they were great, but could use just a little more meat in them. I think if I had used half a packet and a few less veges they would have been perfect.

The final entire single-serve portion was tossed back in the pot and was used with some extra lamb mince that had been fried off with a little red onions and garlic, and this was then bolstered with about half a can of unflavoured diced tomatoes. As a bolognese topping for some freshly cooked 'fettuccine tricolore', this was unbeatable for dinner. I was really quite impressed at how well it turned out.

Overall, this is, so far, my favourite from the range and one I plan to buy plenty more of, especially when I see them on special.

The other week, my husband was away on a trip, so I was looking for easy hearty meals for me and the girls. I had half of this bag of soup for my lunch one day. As a soup this is very filling. I found the texture to be quite stringy, which was similar to the other soup we tried in the range. I really liked the flavour though. It was full and delicious and my favourite of the soups.

For dinner that night, I decided to see what else I could do with this soup. Into a casserole, I added some lamb pieces, and used this product for the base. I cooked everything until the meat was tender and served this with a side of couscous. Both of my girls ate a little of the meat. My eldest said that the sauce was nice. My toddler preferred the casserole over her couscous side.

I found that the soup was very versatile, and added a full body flavour with the meat pieces being a nice addition. This would have been great with a cheesy potato mash topping as well. Of all the soups in the range that I have tried, I liked this the best and I would be willing to purchase this one again.

I definitely think that refrigerating these meals brings out the flavour in these dishes. The soup was very tasty, and it wasn't completely liquid either. I found that the consistency was quite pleasant, there was some shredded meat and the soup itself was absolutely delicious.

I think that the portion size was good, it was an adequately filling meal, so the label on the pouch was correct in saying that there was enough for two. Like with the Chicken and Garlic Risotto, this meal was best served with bread, as it helps soak up the flavour and provides a better consistency.

The soup had a high visual appeal, it looked okay before it was heated up, but it looked even better afterwards. My dad said that this meal was a bit watery, but I have to disagree with that, it really was quite delicious. I think that this is my favourite Pitango meal so far, and I hope that the other two meals that I got to review will be delicious. The price is awesome, it is the perfect price for a food product like this. Overall, I have to say that this meal is very delicious, worthy of it's price, and I am looking forward to trying the others.

When I first opened my pouch of Pitango Organic Sping Lamb, Red Wine and Rosemary Soup to pour into the bowl to heat I thought it was more like a casserole and was debating whether I should get out a fork or a spoon to eat it with. Once it was heated it wasn't as thick but I would definitely be classed as a hearty soup. It is packed full of vegetables and lamb.

I am not a drinker so I have little knowledge of what red wine tastes like but I do know that it brings out the flavour of the lamb. The rosemary also complimented rather than over-powered the lamb. For something so tasty it is very hard to believe it is so low in fat too. I can happily eat this with out worrying about my waistline. Red wine also has lots of health benefits too. Another plus for this dish. A serving was so filling too that I didn't want anything else for a while. All this from heating for a couple of minutes (90 seconds for a single serve in my microwave) it couldn't be easier.

I would say this is a restaurant quality soup and you would get compliments serving it at a dinner party (as long as you hid the pouches). It is certainly much cheaper, especially if you grab it on special, than what you would be charge for a soup in a cafe or restaurant. Out of the four Pitango products I was given to try this would have to be my favourite and the one I will be definitely buying again for myself and recommending to others. The other products were good but this one was great.

Sweet caramalised vanilla and honey coated almond made to an old Viennese traditional family recipe past down over the generations. Cooked by hand in large copper pans European Christmas market style! Treat yourself!