« Africa - Eye to Eye with the Unknown review 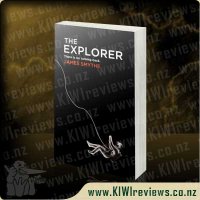 Disclosure StatementFULL DISCLOSURE: A number of units of this product have, at some time, been supplied to KIWIreviews by HarperCollins or their agents for the purposes of unbiased, independent reviews. No fee was accepted by KIWIreviews or the reviewers themselves - these are genuine, unpaid consumer reviews.
Available:
March 2013

I've thought of killing myself, but something stops me. "Just think, it says, you'll go further than anyone else has ever been. You'll see deeper into space than anybody else has ever seen. You'll make history." "But nobody will ever know," I reply, and the something doesn't say anything back to me, just sits there in the dark. I take my place in the chair at the front of the ship and decide to ride it out.

When journalist Cormac Easton is selected to document the first manned mission into deep space, he dreams of securing his place in history as one of humanity's great explorers. But in space, nothing goes according to plan.

The crew wake from hypersleep to discover their captain dead in his allegedy fail-proof safety pod. They mourn, and Cormac sends a beautifully written eulogy back to Earth. The word from ground control is unequivocal: no mater what happens, the mission must continue.

But as the body count begins to rise, Cormac finds himself alone and spiraling towards his own inevitable death... unless he can do something to stop it.

Wow, I never thought I would come across a novel that ticked so many of my 'good stuff' boxes - deep space, sci-fi, cryogenics, paradoxes and exploration - and yet be SO FLIPPIN' HARD to get into! This was a real mission for me to read.

Being only the second novel from this admittedly talented author, it was still something I found I struggled with. Maybe it was the constant jumping between the retrospectives and current viewpoints of two main characters, maybe it was the premise behind the storyline itself, maybe it was just the style in which it was written... but whatever it was I found myself severely conflicted.

On the one hand I found myself absorbed by the constant tension, the feeling that a major revelation was just a page or two away... and on the other hand I found myself trying to determine if ANY such revelation could possibly be worth wading through another page to reach it. In places the tension was electric, it had me captivated by the points of view portrayed... and without giving away a major plot spoiler, I can't be more specific... but at other times I found myself quite willing to ignore the book for hours, even days, on end, knowing that in order to finish it I would have to wade through another tedious section of the main character's maudlin self-pity and recriminations.

Overall... quite the 'mixed bag' and one I don't think I will re-read any time soon. This will be one I happily donate to a charity, hoping it will find a more accepting and happy home.

Day meets Night and Night meets Day in this delightful picture book based on the Pixar short, Day & Night, which premièred with Toy Story 3 in 2010. Kids will delight in the way these two characters explore their differences and eventually realize how much they like and enjoy each other. A wonderful way to experience the magic of this Pixar short again and again and rejoice in the attraction of opposites!