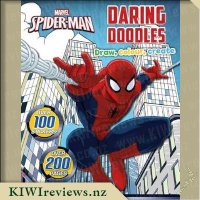 Disclosure StatementFULL DISCLOSURE: A number of units of this product have, at some time, been supplied to KIWIreviews by Scholastic (NZ) or their agents for the purposes of unbiased, independent reviews. No fee was accepted by KIWIreviews or the reviewers themselves - these are genuine, unpaid consumer reviews.
Available:
August 2015

Over 200 pages of Spider-Man doodling fun! Complete the scenes, add to the web-slinging action and colour the pictures. Hours of adventures for Super Hero fans.

My six year old daughter is a huge colouring in fan , and is loving extending her colouring and using her imagination , and so this colouring book looked right up her alley ! I was very pleased to be given this to review! Miss Six took one look at this and went straight into her bedroom and wrote her name on it - claiming it over her siblings !

What I liked about this page when I flicked through it was that it was a colouring book that encouraged imagination , and creativity - which in this day and age of electronic everything , was really great ! I was a bit worried she might not like it - not being a huge Spider man fan , but she really did !

Each page is different , some prompted Miss six to finish a picture , some invited her into the map to decide what would happen next , some had sketching or mirroring - and as well as that - there are STICKERS!! Most of the activities Miss Six was able to do with little to no assistance - making it a great book for quiet time !

Miss Six said that she liked this book as it was '' a story she got to finish '' which is a good summation - you read , you contribute , and it is your story book .

I agree with another reviewer in that the pages were thin - meaning felts tended to go through, or show on the next page - which disappointed Miss Six. In terms of the price - it is pricey - and with that , an improvement on the quality of the paper would be great . Upon saying that - it is CRAMMED with activities , making it a great all in one book to take on holiday , or to somewhere where you do not want to have to take many books !

With the price I would think twice before purchasing , however - as a gift for an older child and Spidey fan - this is awesome !

My seven year old daughter loves Spider-Man just as much as she loves drawing. When I was given the Marvel Spider-Man Daring Doodles book to review I knew it was going to be a hit with her. I also knew that I would have to allow lots of time for her to spend with it. I was right as soon as I gave it to her she was absorbed in it. The only time I heard from her for the rest of the afternoon was for help reading the instructions.

On each page there is a partially drawn scene with one or two sentence long instructions on how to finish it although often there was scope for creativity in this too. This allowed my daughter to put as much effort as she wanted into each drawing. In the three solid hours she spent on the book she only completed 6 pages. According to the cover there are over 200 pages in this book. That is a lot of time that she can spend on it. At $15.00 it is great value as a gift for a child that is stuck in hospital or spends hours in waiting rooms or travelling.

As well as engaging in her love of drawing there was an unexpected bonus to this book. It got my reluctant reader reading. She was so keen to read the instructions and because they were only a couple of lines each, they didn't appear daunting. I could hear her trying to read them when usually she would have call for Mum or Dad to read it to her. That alone is a reason to give this book top marks.

The only thing I felt needed to be improved was the thickness of the paper. The felt and pen showed right through the page which wasn't ideal when there were activities on both sides of the page.