ProdID: 6274 - How I Alienated my Grandma
Author: Suzanne Main 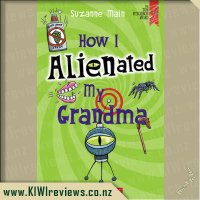 How I Alienated my Grandma product reviews

"Grandma looked back over her shoulder at me and winked slyly. Beneath her eyelashes, at the moment when her eye had closed and just begun to open again, I glimpsed a flash of bright green eyeball with a black streak running through it. I blinked and looked again. Grandma's watery blue eyes smiled back at me. Did I imagine that too?"

Michael's granny might look normal, but she isn't. Ever since Michael unearthed a strange object from his backyard and pointed it at his grandma, her behaviour has been off the planet, and no one except Michael is noticing it. A spaceship load of trouble has been unleashed from Michael's garden and he is going to need some help to sort it out.

But when his only allies are a bumbling sci-fi geek and a stinky oddball, what hope does he have of saving his granny and stopping the diabolical plan that threatens them all?

I had seen this book in our local book store a few times. The cover is so eye catching, amongst the other novels for kids at the moment. That slime green colour is just so vibrant. The cover art suggested aliens would be involved, and there could be a play on words with "alienated". It looked like it was going to be pretty funny.

Inside the book, the story unfolds. I liked the style of Main's writing right away. The main character drew me in without too much convincing. He is a fairly immature kid, but with good heart. From what I could tell, he screws up a lot, but never intentionally. That made him easy enough to like. The setting, puts him in a town that sees the bad in him a lot. He is very accepting of the attitude, which was a bit sad for me. I have a kid a bit like him, so I felt quite motherly towards him.

The catalyst for the story unfolds in the first two chapters. So this helped draw me in, because the action was immediate. The addition of Elvis as the side kick was neat. He is a kid after my own heart! A bit of a nerd, who knows a lot about all sorts of science fiction. In this story he is very handy, because he fills in all the intelligence that we need to push the story forward. With these things brute force doesn't always get you where you need to go.

There is plenty of humour in this book. But it's woven into the story effortlessly. They just happen to find themselves in crazy situations along the way, that involve a bit of toilet humour and a lot of slapstick. Because of the humour, the tension in the story doesn't overwhelm the reader. Yet it doesn't break the story up at all either. You get a steady flow of fun and intensity that drives you chapter to chapter to the end.

This book took me two evenings to read, though to be fair I could have done it in one. I just decided to get an early night in the middle. I found myself seeking the book out to read in quiet moments, which is a great sign. I didn't get that avoidance feeling once. This is quite a thick book, so I think the price is bang on for pages. It's a story that would suit any kid, probably middle primary age to early high school. It's probably more aimed at boys, though I still see it being entertaining for girls who like a bit of adventure and sci-fi.

How I Alienated my Grandma has an eye catching cover, an interesting title and the blurb is very intruiging leaving you wanting to read more!

Master Seven decided the book was too much for him to read alone and Miss Ten was keen to read it with some help so we had turns reading it chapter by chapter. Miss Ten thoroughly enjoyed the book and reading her parts by herself, Master Seven had a wee bit of difficulty but still liked the story. Even Mr Three sat with us and listened.

Master Seven enjoyed the fact that the main character "Michael" gets into trouble and mischief just like himself! Miss Ten liked the fact that he "alienated" his Grandma and all the adventures that Michael and his neighbour Elvis go on! I enjoyed the whole story and that it was easy to read for both myself and the kids. There was not one Yawn worthy moment!

Master Seven thinks it would be better if there were a few pictures but Miss Ten had no complaints so I'd suggest this for kids around Eight and up. Miss Ten has asked to take the book to school so to me thats a great sign! Anything that gets the kids involved in reading is an awesome advantage! Ten out of Ten from me!

Take a thrilling and interactive journey to find out why dinosaurs once ruled Earth. Filled with fantastic activities built around common questions young learners wonder about dinosaurs, over 40 stickers, and more!