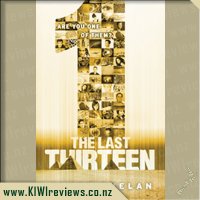 Disclosure StatementFULL DISCLOSURE: A number of units of this product have, at some time, been supplied to KIWIreviews by Scholastic (NZ) or their agents for the purposes of unbiased, independent reviews. No fee was accepted by KIWIreviews or the reviewers themselves - these are genuine, unpaid consumer reviews.
Available:
December 2014

Sam makes a shocking discovery about the last 13 that will change everything. The Shattering revelation will set the race on a dangerous course, more terrifying than Sam's worst nightmares.

With the world in turmoil and their enemies circling closer, the last 13 assemble in Egypt to fulfil the prophecy. Can they all make it to the end alive or will the power beyond the Dream Gate be lost to evil forever?

The last 13 is complete, the battle ends now.

This is one series I have read from the beginning and haven't tired of, I waited for what felt like an eternity for this the final book to arrive, and it was well worth the wait. The conclusion to the series was done beautifully with everything being wrapped up and things finally beginning to make sense in ways I could not of expected. Right from the begining I have tried to piece together the puzzle and try and solve it but the series has been written in such a way to always keep me guessing.

Well what can I say about this book, one thing I can say is it is full of surprises we have always known throughout the series to never trust anyone and that is made even more evident in the final battle. We learn who Solaris is behind the mask which came as quite a surprise it certainly wasn't who I was expecting and I don't think others would of been expecting this revelation either. The author did a great job of keeping this well under wraps.

Some favourite characters are lost in the book as has been the case in other books in the series so it really was a win or lose battle which kept me on the edge of my seat for the whole of the book. It looked to be going in Solaris's favour for part of the book and I was begining to get worried as to what fate awaited the last thirteen, especially when the last thirteen dreamer was revealed I won't give much away but it was quite an interesting and scary twist in the storyline.

I read the book from cover to cover within a couple of hours as I just had to find out how the series ended so I would say it is definitely a page turner especially if you like me have followed the series from the begining. The book brings together the pieces of the bakhu and reveals just what the dream gate holds what they have been fighting for the whole series. Well worth the read if you have pre teen children although like you can tell I as an adult thoroughly enjoyed the series myself.

Well, after what has felt like forever, I finally have my hands on the conclusion to this series, and it was well worth the wait. This series has managed to keep a thick veil of mystery around the core subjects since the beginning, so I had no idea what I was going into when I started reading, but the previous book had left the story in a very interesting position. It only seemed obvious that the last of the Last 13 would be someone unexpected, but the character who took this role was truly surprising, and caught me off guard even when I was prepared. Another surprise came when the book finally revealed the identity of the person behind Solaris's mask, and while I will not say who he is, let's just say he's someone we heard of a LONG time ago, but haven't heard much of since

Things in this book began to get a little surreal at the end, when the group was heading for the dream gate, but what was that old saying, any sufficiently advanced technology is indistinguishable from magic? The action present within this book was not evenly distributed, but instead the first bunch of chapters were all just the lead-up, things began to get REALLY interesting in the last third of the book.

The characters in this book will really surprise you, familiar names which we trusted and thought we knew turn out to be completely different. I think, that in order to explain my point, I need to analogize this book to a mechanical puzzle, each book turns the pieces, but now this final book has clicked the last few pieces into place, everything now makes sense, and this feeling of realization is something I really enjoyed, as I was able to finally know everything that all those little connections formed in terms of a bigger picture.

I think this has been a very, VERY great series, and this book is a grand finale well worth the lead-up. The book itself was well-written, had a very imaginative plot, and was insanely fun to read. The book managed to wrap itself up, so it is very easy for this series to remain 1 series, because if this was to end up like the 39 clues, it could get boring pretty damn quickly. This book was supposed to be a conclusion, and it has certainly lived up to that promise.

I have no issues with anything in the book, is was flawless in terms of what it was meant for, and I would quite happily read it again. I would also recommend this to anyone who has had any interest in the series, but I would also highly recommend that all the other book should be read first, as this book won't make any sense whatsoever without a knowledge of past events. So, yeah, that's all I have to say, enjoy!

All the dragons on Dragon Island are fierce, fiery and ferocious. Except for Norman. And Norman tries desperately to change the others, but finally realises that, sometimes, others won't change their ways and the only thing to do is walk away...