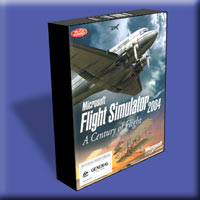 Disclosure StatementFULL DISCLOSURE: A number of units of this product have, at some time, been supplied to KIWIreviews by Microsoft or their agents for the purposes of unbiased, independent reviews. No fee was accepted by KIWIreviews or the reviewers themselves - these are genuine, unpaid consumer reviews.
Available:
at all good game suppliers

The planes. The pilots. The passion.
One hundred years after the Wright Brothers achieved their first landmark success, Microsoft Flight Simulator: A Century of Flight brings aviation history and airbourne adventure into your home. Take control of 24 accurately replicated historic and modern aircraft as you re-create the legendary journeys of the past and push the envelope of today's top aviation technology.

As Real as it Gets
Adjust flight controls, tune radios and operate aircraft systems in interactive 3d 'virtual cockpits' that put you in the pilot's seat.

Fly through dynamic, automatically updated, real-world weather systems or create custom weather challenges that put your skills to the test.

Experience the challenges the original pilots faced as you re-enact significant events in aviation history.

Now personally i'm more of a Combat Flight Simulator person myself, but i had to say this one had me hooked. I originally looked at this due to a project that I was currently working on, and I must say I was impressed straight away.

The graphics are superb and still look good on any platform. From my lack lustre 1GHz Duron with 256MB Ram & 32MB GeForce 2 MX 200, all the way up to a P4 3.2GHz with 1GB Ram & 128MB GeForce FX5200. Obviously I had the detail cranked all the way up on the P4 but even on the Duron with lower detail settings it still looks good.

The handling is good when used with a good quality Flight Stick/Yoke & Pedals and the dead zone adjusted appropriately, but is still perfectly playable with my good ol' Sidewinder Precision Pro 2 Joystick.

Sound is great when coupled with a good Quality Sound Card and a good stereo system, but still is fine with a pair of standard Dick Smith multimedia speakers.

The immersion factor for this is higher than I expected. But considering the quality of graphics and the extra free addon's that are available (especially the New Zealand scenery/airports as well as the 150m Terrain Mesh from GEOGRAPHX) it makes it all that much more real and infinitely more playable, but it didn't quite keep me up all night playing it.

And as for the replayability, I was always coming back to try that landing once more, just so I could get it perfect.

One downside is the inability of some of the earlier planes developed for pre FS2002 (and some of the FS2002) to be used in it. But on the plus side there are a huge amount of people developing for FS2004 now.

So all in all, well worth adding to the Software Collection.

After discovering that lovable robot Clankâ ™s disap­pearance was engineered by Dr. Nefarious, the Wrench-swinging Ratchet races to save his best friend. Along the way, both will finally uncover the hidden truth behind ... more...