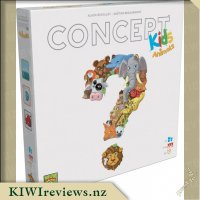 Concept Kids Animals is a game which allows children to discover the animal kingdom while having fun. Everyone plays and thinks!

Concept Kids Animals is a cooperative version of the game Concept, adapted for children who don't yet know how to read In turn, the children attempt to make the others guess an animal by playing pawns on the illustrated icons on the game board. Through this, the child indicates a feature of the animal to be guessed. Draw 12 cards and attempt to find as many animals as possible in order to get the most points together!

Concept Kids Animals offers 110 animals to be guessed, divided into two difficulty levels. Beautifully illustrated by Éric Azagury, this communication game for children will allow them to discover the world of animals in a fun and innovative way.

I had already bought Concept, the main edition of this game, when I saw this on special and having had success with Catan Junior, thought I'd grab this for the family. The rules aren't something that we've stuck with, down to the letter, simply because my kids didn't find it as fun. The original rules have it that one person draws twelve cards and then, one at a time, gives clues, whilst all the kids make guesses and try to name the animal. We threw that rule out the window in favour of one that gave everyone a turn to give the clues and the first person getting five right being the winner.

The board is easy to follow, it's in sections that are easy to work out. The clue giver isn't meant to speak, simply place the orange squares over their clues in the various categories which cover size, home, physical characteristics, diet, colour, movement, strength, speed and most oddly, if it is a happy or angry creature... The cards are colour coded, so you have one set of easier animals and another set which provides more of a challenge, plus half a dozen or so mythical creatures. You do have to allow for some wriggle room and confusion. If you don't know the animals diet or where they typically live, you may not give/get the right clue.

This isn't a game that I grab down off the shelf to play with the kids, I don't find it clear enough for some of the images you can select and if someone doesn't know the animal it can get a bit irritating. Thankfully, the number of clues that can be given is finite and that's when the turn ends, onto the next animal. My 8 and 10 year olds both enjoy it but Miss10 is now looking forward to trying out the full version, which I must say, I'm very happy about that.

Far Cry 3 players step into the shoes of Jason Brody, a man alone at the edge of the world, stranded on a mysterious tropical island cut off from civilization. In this savage paradise where lawlessness and violence are the only sure thing, players will dictate when, where and how the events of the game unfold. Players will slash, sneak, detonate and shoot their way across the island in a world that has lost all sense of right and ... more...