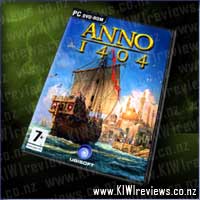 Set in the Orient, ANNO 1404 offers a richness of features never before seen, bringing the ANNO series to a new level. Exploring a strange and fascinating island world in the utmost East, players will get to know the culture and technology of the ancient Orient while learning the tricks of local trade, diplomacy and economy in order to build their own metropolis.

New customizable elements, dozens of embellishing objects and bigger islands and worlds will provide players with endless opportunities to express their creative vision, making all metropolises look truly unique. A new intuitive interface, as well as a motivating, fully modifiable sandbox mode will make it easy and enjoyable for everyone to play.

I really enjoy building games, as a rule. I will often find myself playing ones that other people thought were lame or annoying for longer than I should, so when I say this game was really unintuitive, it comes from significant experience of games in this genre.

Anno was another one of those games for me, where the expectation didn't quite match up to experience. I did love the story and cutscenes, a nice change compared to games like Emperor and Pharoh where you just have to read the backstory, if there is any, in campaign mode. But the way the navigation was set up quickly frustrated me. Nothing is where it is supposed to be. There were also no log books or screens you could open to see what was going on in a grander sense - I really liked the 'advisors' panels in the Sierra building games.

One big up for this game, however, was the fact that there were NO GODS!! Yay! Seriously, gods getting mad and causing natural disasters when you don't sacrifice enough of your resources of them was a terrible idea to begin with. I am glad that more recent builders are dispensing with them all together.

All in all, this game was okay but it didn't capture me and at $99.99, I think there are probably better games you could get for the money.

Forza Horizon is an open-world game based around a fictitious festival called the Horizon Festival, set in Colorado, USA. The game incorporates many different gameplay aspects from previous Forza Motorsport titles, like the large variety of cars, realistic physics and high definition graphics. The aim is to progress through the game by means of obtaining "Wristbands" by driving fast, destroying property, winning races and other driving antics. ... more...