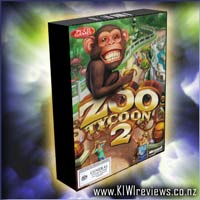 Disclosure StatementFULL DISCLOSURE: A number of units of this product have, at some time, been supplied to KIWIreviews by Microsoft or their agents for the purposes of unbiased, independent reviews. No fee was accepted by KIWIreviews or the reviewers themselves - these are genuine, unpaid consumer reviews.
Available:
November 2004

Featuring 30 incredibly detailed animals, a dazzling array of building tools and objects, a new zoom feature, and 3D graphics that allow players to keep a closer eye on the action and craft more creative zoos, Zoo Tycoon 2 is set to crank up the excitement, challenge, and fun of building the ultimate zoo.

Easy to start and easy to play, Zoo Tycoon 2 gets you up close and interacting with the animals and zoo, offering intuitive controls and fun tutorials that allow players of all ages to enjoy the game right out of the box.

From the start, you'll be immersed in the zoo experience with new features including the Zoo Guest mode, in which you can walk around and enjoy the game like visitors on a day at the zoo; Zookeeper mode, which allows you to interact with your animals as never before; and a new Photo mode, which lets you snap pictures of your favorite animals and guests and share them online with friends. Also included, the Zoopedia, detailing all types of entertaining and interesting facts about animals, rounds out the new and improved features of the upcoming game.

I am always dubious of sim games such as this, it can often take ages to get to grips with the interface, and there are often teething troubles while you build up your basic infrastructure. Thankfully, I found this not to be the case this time.

Freeform mode gives you the greatest training method, in my opinion. All options are open and available, and you have an unlimited budget. Want to adopt a heaping pile of critters, and run the zoo into the ground financially without penalty? This is the way!

Gaining fame, popularity and awards is slow, but once your 'endangered species' start to breed, your certificates start to pile up pretty rapidly.

It is important to give your animals the right environment to live in, otherwise they get upset and agressive easily... never a good look for the visitors. Thankfully, this can be done very easily with the Biome Brush, which can alter the land and water, plant appropriate fauna, install rocks and enviromental elements, all in one swipe of your mouse. This makes it so much easier to create appropriate enclosures, which in turn increases your zoo's 'educational' quotient.

Once you are comfortable with the way the game works, you should reset and start from scratch in normal play, aka Scenario mode, and have a blast! Add to that an astounding web-based resource site with links, contacts, downloads, info, and updates... and you really do have a great new way to play. I enjoyed flipping to Zoo Guest mode, getting an interactive view of my menagerie from ground level, and the Photo mode was seriously dinky.

Overall, my only gripe was that using the Biome brush I accidentally turned a delightful waterfall into a cliff-top lake that steadfastly REFUSED to overflow and become a waterfall again. This defied all known natural laws that I know of, since the water was still flowing, but not accumulating at all... paving the way for the first of the upgrade fix-patches. I could not find a way to 'dig it out' again so that I could have my waterfall back, so ended up dumping and restarting the entire zoo, just to fix a small bit of rock. But the game itself, stunning!

Score: 6.5
Product reviews for listing 5479: Injustice: Gods Among Us -  Developed by NetherRealm

Set in a world where the lines between good and evil are blurred, players will experience heroes and villains engaging in epic battles on a massive scale. A deep, original ... more...