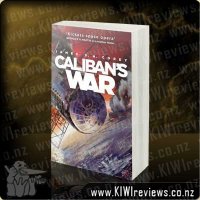 Disclosure StatementFULL DISCLOSURE: A number of units of this product have, at some time, been supplied to KIWIreviews by Hachette or their agents for the purposes of unbiased, independent reviews. No fee was accepted by KIWIreviews or the reviewers themselves - these are genuine, unpaid consumer reviews.
Available:
July 2012

Taking up pretty much where the first book - Leviathan Wakes - leaves off, we are now presented with an example of just how stupid humanity can be... using sick children to experiment on while trying to tame a self-aware alien organism that has, to all appearances, taken over Venus and is rapidly reformatting the entire planet to suit it's own ends. You just don't mess around with something like that, you only hope to survive it. Throw into the mix the ever-ready-to-spill-the-beans space jockey, James Holden, who's radio broadcast in books 1 started a solar-system-wide civil war... and looks to ignite an even bigger one in just the same way in this book! The guy just has no idea what a focal point for chaos he is!

I loved the characters introduced in this volume, especially the fiesty UN beurocrat Chrisjen Avasarala and the Martian marine who was the sole survivor of an attack by the first alien-enhanced soldier, Bobby Draper. These two unlikely, and somewhat adversarial, allies build such an improbable balancing act they become the perfect fusion. A bit like Asian cuisine, where the stark contrast between ingredient flavours fuses into something amazingly tasty when combined in just the right portions. A fair chunk of the book is, really, the tale of how these two try to find a good balance so that they can be effective together to try and deter humanity from it's pointless civil war - started as a diversion to distract people's attention away from the hidden experiments - and focus on the REAL threat, being absorbed into the growing alien lifeform.

With some great character development going on, the 'alien invasion' plot does seem to get a little subsumed itself, playing second fiddle to the search for a lost child, the rise and fall of the crew of the stolen Martian warship, the hunt for a political scapegoat, and the horrifying consequences of the unauthorised experiments. Oh, and the ending leaves the plot of the next book in the series wide open to just about anything! So was this a good book, and did it follow the usual "trilogy plot evolution" - Yes, and surprisingly, no! Yes, this was indeed a great read - I found myself lost in it while reading, and itching to get back to it when I wasn't... but it didn't seem to follow the usual plot trajectory for a multi-book series, wherein the first book is introduction and scene-setting, the second book (and any others bar the last) is where the real action kicks in, and the last book rounds it off and ties up any loose ends that aren't required to lead us into another series set in the same universe. This book seems to have taken a different tack, wherein there was less action than the first book, but more character development than would be expected.

Overall, what's the verdict? A great read, for sure. Expect something different from this series for sure. I can't wait to see what comes of the next book in the saga, because frankly, I am enjoying the technology and the alien organism far more than any other aspects of the world I was presented with. Though this book really does have a lot going for it, and will undoubtedly prove itself to be a vital part in the overall plot, I did find it a little weak and dull in places - something I didn't encounter with the first book. This one sets up so many questions I want answers to... including "Did anything 'human' survive inside the alien entity that crashed on Venus?", "It's clear the alien organism was sent to hijack life on early Earth in order to make something else... but to what end?" and "Will Holden EVER learn to keep his mouth shut when the brown stuff hits the spinning bladed thing, or is he forever doomed to pissing off powerful people and causing havok everywhere he goes?"

A new story collection featuring 26 adventures across time and space!

The Heroes and Monsters Collection brings together our favourite short stories from the last ten years of Doctor Who. In these tales the Doctor and his companions face the Daleks, the Cybermen and many more terrifying foes. Also includes three brand-new stories for 2015, featuring the War Doctor, Clara and the Twelfth Doctor.

With all the humour and thrilling action of the iconic television programme, the Heroes and Monsters Collection is a wonderful read for any Doctor Who fan.