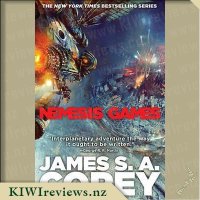 Disclosure StatementFULL DISCLOSURE: A number of units of this product have, at some time, been supplied to KIWIreviews by Hachette or their agents for the purposes of unbiased, independent reviews. No fee was accepted by KIWIreviews or the reviewers themselves - these are genuine, unpaid consumer reviews.
Available:
May 2016

The sins of the past are returning to exact a terrible price. And as a new human order is struggling to be born in blood and fire, James Holden and the crew of the" Rocinante" must struggle to survive and get back to the only home they have left.

Of the five books I have read in this series thus far, this is the one most unlike all the others. While the other books have a high focus on the alien bio-machines, this book has a lot more focus on the human dramas - a planetary coup, interplanetary war between human factions, subversives, family dramas, long-hidden dirty secrets coming to light threatening to destroy bonds, new bonds forming between the unlikeliest of parties during the direst of situations... you know... Shortland Street in Space.

While the whole "alien mystery" is still a clear part of the "Expanse" universe, this book really does put it to one side and we see very little of it until the very end of the book - a couple of pages with sparse comments about the proto-molecule, and a brief paragraph about the 'other' alien tech, the one that killed the promo-molecule-makers' civilisation. I admit, I have a vague grasp of what kind of 'life' it is, and it terrifies me to think such a form of life could potentially exist somewhere out in the vastness of space. What I also admit is that I am deeply, madly in love with the way their universe is described, and how it appears to the human sensorium. Seriously, I'd be LOVING that... albeit until that freaky-as life comes a-hunting me.

Overall, for a die-hard sci-fi buff like me, this book came across as a bit weak in terms of the plot elements I have become accustomed to in the series thus far. Don't get me wrong, the character definition and development is top-rate, it's self-consistent, has some great tech in it, solid drama and thrills, you name it... it just doesn't have the one part that I love the most - the freaky alien goo. I'm hoping something akin to that, or more of this new alien life, appears in Book 6.

Pack pizzazz into your Web sites with Flash!

Start with simple animation, or create whole pages in Flash.

The newest version of Flash offers all sorts of cool options for designing Web sites that stand out from the crowd, and this handy guide makes it easy. Enhance your site with animated graphics, boxes, or buttons; morph shapes; create text with exotically changing colors; add sound or video; and watch visitors flock to your site!