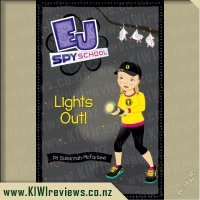 Emma Jacks is Agent EJ10. She goes to Spy School. It's time for night mission training. But Emma is a little scared of the dark...

We have never had an EJ Spy School book before. First time for everything though. I wondered if my daughter would enjoy this type of book. The main character is a female and she is training to be a spy. I felt like it might be a good, strong role model to introduce her to. This book is quite thin, and the prose itself is quite light as well. I would describe it as a starter chapter book. The font is large, and well spaced. The words are less complicated too.

We sat down to read this one evening. As we had some time, I was able to read the whole thing in one sitting. However, if my daughter was reading it it would have taken a lot longer. She is not a confident reader, though I suspect that she would be able to read most of this book independently. The story was easy to relate to for Miss 8. She is a little fearful about the dark, especially in the early morning. So she felt a great deal of sympathy for Emma.

As the story moves along, it is good to see Emma face her fears and not let them stand in her way. She is strong in the face of a challenge, and she does great while still staying true to herself. I also liked that she showed empathy. My daughter was very concerned about the animals encountered, and that they weren't safe. So Emma's care and attention was really appreciated.

Because this is a short read, I could see myself re-reading it again. I also like that this is something that she could practice her silent reading with. Miss 3 has flipped through this book once or twice, but at this stage has no interest in having me read it to her. But if she was 5+ I think she would be right into it.

My kids have been enjoying this series of books as Emma learns how to be a good spy and learns lessons along the way. This book I was particularly keen on as I have two children who are scared of the dark and one who it differs depending upon the mood they're in that day and how vulnerable they are feeling. There are of course a few things that as a parent takes away believeability from the overall story but the kids get a real thrill out of the book so I can put aside my dislike for the gaping plot holes in favor of their fun.

My kids could easily relate to Emma and her fear of things in the dark in her room and seeing and hearing things that aren't actually there. They thought the baby animals in this book were "awwww, cute!!!" and were really hoping that they would be OK in the end. They loved seeing and hearing what gadgets Emma had to use and afterwards they were busy pretending that they were spies and had to save our cats from the enemy organisation, Shadow, though our cats weren't very happy to be 'saved', I think they must be enemy agents...

The kids really liked this and my eldest is now at the perfect reading stage where he can start to read some of the words and follow wih me. Can't wait for the next one.

New York Times bestselling author Wilbur Smith - hailed by Stephen King as the "best historical novelist" and one of the world's biggest-selling authors - returns to Ancient Egypt in this breathtaking epic that conjures the magic, mystery, romance, and bloody intrigue of a fascinating lost world.

Game of Thrones meets Ancient Egypt in this magnificent, action-packed epic. On the gleaming banks of the Nile, the brilliant Taita - ... more...