My Name is Mr Fox review 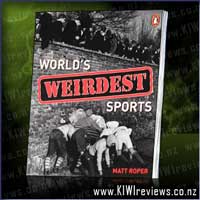 Disclosure StatementFULL DISCLOSURE: A number of units of this product have, at some time, been supplied to KIWIreviews by Penguin Random House or their agents for the purposes of unbiased, independent reviews. No fee was accepted by KIWIreviews or the reviewers themselves - these are genuine, unpaid consumer reviews.
Available:
August 2007

Are you sick of the same old games? Are you tired of that silly round ball, that patch of muddy grass or that boring old rulebook?

Explore the limitless world of sport and put some -zing- back in your weekend!

We've tracked down the world's wierdest sports, from the fascinating to the downright bizarre... from traditional games played for centuries, to newfangled creations that are just catching on.

Whether it's wrestling with a greased cocnut, fishing for squirrils or playing rugby underwater, this book proves that people will do anything in the name of sport.

I had to laugh at some of the things people call 'sport'... from stacking themselves up in a tower up to 10-storeys high (Castell), to grabbing each other by the shoulders and kicking each other's legs into submission (the aptly-named 'Shin Kicking'), from the Eton Wall Game, which last had an official goal scored back in 1909, to Parkour, which is basically non-stop obstacle running... recently made famous in the opening scenes of the latest james Bond move, "Casino Royale".

There's even a really funny one... Competitive Extreme Ironing! Yup... that's right. The rules are simple... you must use a regulation ironingboard, the garment being ironed must be at least the size of a tea-towel, and the iron must be switched on and hot. The "Champion of the Universe" was crowned in 2006 when he leapt out of a plane at 7625m, ironed a shirt, the trousers he was wearing when he jumped, a pair of wrestling tights, and his parachute (which he re-packed in mid-air) before landing safely a mere *5 minutes* after he left the plane! -shakes head in disbelief-

Overall... though this is not exactly a reference book, it's one heck of a funny coffee-table book... it will spark much comment, debate and hilarity when browsed through casually over coffee.

When Tudor explorers returned from the New World, they brought back a name out of half-forgotten Viking legend: Skraylings. Red-sailed ships followed in the explorers' wake, bringing Native AMerican goods - and a Skrayling ambassador - to London. But what do these seemingly magical beings really want in Elizabeth I's capital?

Mal Catlyn, a down-at-heel swordsman, is appointed to the ambassador's bodyguard, but assassination attempts are the least of his problems. What he learns about the Skraylings and their unholy powers could cost England her new ally - and Mal his soul.