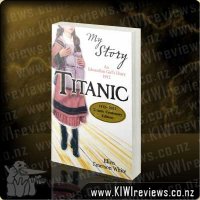 Margaret Anne dreams of leaving the orphanage behind, and she can hardly believe her luck when she is chosen to accompany wealthy Mrs Carstairs aboard the great Titanic. But when the passengers are woken on a freezing night in April 1912, she finds herself caught up in an unimaginable nightmare...

I have always been fascinated with Titanic. When I won this book in a KIWIreviews competition I wanted to read it even though it is a book intended for intermediate aged children. It was a light read for me as an adult but I still found it hard to put down. I also found it quite thought provoking and shed a few tears at the end.

The story is the diary of a fictitious passenger on the Titanic. Although I have heard the story of the Titanic many times I didn't know if Margaret Anne would survive or if would be just her diary that would.

The book was an eye-opener into the class system the operated in Edwardian England. Margaret Jane was an orphan travelling as a companion for a wealthy women in first class. She was able to see how well they were treated compared to steerage class as well as how the upper class looked down on the others.

Although the majority of the book is a diary there is also a historical note, timeline, and photos at the back. This made for interesting reading especially as I was able to relate it back to Margaret Anne's story.

I just finished reading this book. My Story - Titanic is a historical fiction about the lead up to the sinking of the 'unsinkable' ship, the Titanic. It's written for kids, and would probably suit an 8 years+ audience or even young adults.

This book really appealed to me, even though I'm in my 30s. There is something a bit naughty about reading someone's diary. I'm also a bit of a history buff. And I love reading first-hand accounts of historical events. So this book ticked all the boxes for me.

Aside from having watched the movie Titanic, I knew nothing about the ship or the events surrounding the sinking. Now 100 years ago, this is a really well researched book. It tells of a girl wanting to make her way to America for a better life, and her 'good' fortune of having passage via the Titanic.

In some ways it was like watching a train wreck about to happen. I couldn't stop reading. All the while hoping the characters would be ok in the end. Wondering just how the author would deal with the disaster. Obviously with over 1500 deaths that fateful night, there are some terrible tragedies. But its a book of hope and bravery too.

There is also a great section in the back of the book with photos and other bits of research the author had gathered. It was fascinating and heartbreaking to read through and think of all the 'what ifs'. As I'm sure the survivors thought themselves after it was all over.

Overall I would definitely recommend this book. Its a great read, and you don't have to listen to Celine Dion if you don't want to.

Although this story was a little unbelievable at the beginning it is a story of fiction so can be forgiven this flaw! As the story progresses, in its typical "My Story" diary fashion, it more closely relates to the actual events and circumstances of the Titanic's first and last voyage.

Although in diary form this story depicts a lot of the actual conditions (as from the view point of the fictional Margaret Anne) on the Titanic and the fatal night that led to the death of approximately 1500 of it's passengers. This is of course a very complex story but I think that this book does well to relate the basic facts in a way that will capture the interest of a young reader and allow them a base to then do further research.

I think that this book is a brilliant way to introduce your young reader to the Titanic story. Especially because at the end this book includes a historical time line of the events that occurred prior to during and after the sinking of the Titanic as well as actual photos and descriptions.

Of all the books I have read in the "My Story" series this is probably my favourite. I will definitely be encouraging my little readers to read this when they have the comprehension to do so.

Score: 9.0
Product reviews for listing 2429: Shadow of the Scorpion -  Written by Neal Asher

In the years following the war, he signs up with Earth Central Security, and is sent out to help either restore or simply maintain order on worlds devastated by