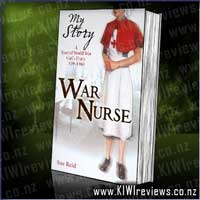 When war breaks out in 1939 Kitty signs up to be a Red Cross Nurse in a military hospital. And it's not long before she's treating badly wounded casualties from the war now raging across Europe. Then the hospital takes a direct hit and Kitty finds herself a reluctant heroine...

I chose to read this book as I enjoy reading about historical happenings and occurances.. However I found this book to be a little bit boring in places.. it did go on a lot about nursing.. which is great obviously, because the book is the diary of a war nurse, but nursing on its own isnt a very exciting topic I feel, and as a result Kitty - the main character of the book - doesnt come across as very interesting.. I would've loved to have been given abit more background information on Kitty such as her past and her family.. just some information to paint a bigger picture of Kitty as a woman and not just Kitty the nurse.. However there were alot of references to actual events that took place during the war which gave the story some much needed oomph.. and as to be expected there were sad parts to this story.. such as the soldiers who become Kittys friends who ultimately lose their lives. This story did make me thankful though.. thankful I wasnt around in the times of war. I loved the timeline and pictures provided in the book.. great for putting things into perspective.. all in all.. not a complete waste of time to read.

I really enjoyed this book, as I enjoy reading about historical events. There were a lot of references to actual events that took place during the war, which made the plot have good depth to it.

However in saying that, I felt the plot became a bit mundane in places. I feel it droned on about nursing too much. This was because I felt the nursing on it's own wasn't very dramatic in places, however the storyline does pick up really well once there was an air raid over the hospital.

In saying that, though I do realise the story is based on the diary of a war nurse, however I felt the main character, Kitty, lacked depth. It would've been nice to hear more of a background on her and her family pre-war.

There were times when my tear ducts were jerked, especially when there were soldiers that lost their lives that were close to Kitty and her nurse friends. I can only imagine the dread, pain and loss all the families went through during war time, and can only hope World War Three never happens.

The timeline and pictures provided did a great job putting all the events into perspective for me.

Score: 8.6
Product reviews for listing 6590: The Game of Love and Death -  Written by: Martha Brockenbrough

Flora and Henry were born a few blocks from each other, innocent of the forces that might keep a white boy and an African-American girl apart. Years later they meet again and their mutual love of music sparks an even more powerful connection.

What Flora and Henry don't know is that they are pawns in a game played by the eternal adversaries Love and Death, brilliantly re-imagined as two extremely sympathetic and fascinating characters. Can their hearts and their wills overcome not only their earthly circumstances, but forces that have battled throughout history?