« The Amazing Spider-Man vs the Green Goblin review 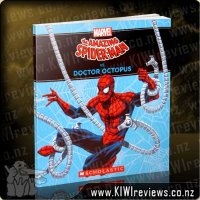 Exciting adventures and battling villians - all in a day's work for your friendly neighbourhood Spider-Man!

This soft cover book, is a picture book, aimed at a younger audience (most likely that of 5 - 12yrs old). The story line is the one that introduces one of spideys greatest villain of all time, Doctor Octopus.

On the cover (when opened out flat) you see the menacing arms of Doctor Octopus holding Spider-Man limb by limb, looking like he is ready to take him apart.

The actual story itself, is actually not too far from this whole impression as he is the first to ever actually defeat spider-man. The reader will find that Doctor Otto Octavius works at the Atomic Research Center and is the most intelligent researcher in that country. He is also nicknamed "Doctor Octopus" for reason that he wears a contraption with four attached arms that enables him to perform experiments in radiation but he is then exposed to an explosion which causes his artificial arms to adhere into his body in some strange way!

The reader will find that Doctor Octopus went on to become a villain seen many times over and has played a great role in the life of Spider-Man.

The downfall of the book, I felt was the swapping and changing of names: Peter Parker, Spidey and Spiderman. Some children would become confused (in my opinion) and think that there were 3 characters.

Overall, this a great book, and my kids and I enjoyed reading it too.

We read this book tonight at bedtime. My daughter is quite a super hero fan, and has grown up with Spidey, the Hulk and X-Men thanks to various board-books I got her as a baby. So she was pretty excited to read these new Spiderman adventures.

The story inside was not brilliantly written, and was clearly an a-bridged version for kids. There was a lack of detail, but the overall premise was there. The illustrations were okay, but not as striking as I would have hoped given this is a kid's book and that Spiderman is such a well known comic hero.

That said, as I read it aloud, I noticed my daughter was on the edge of her seat with excitement. She cheered for Spidey through the battles. It was easy to give the story extra excitement, using the wording in bold blue as cues for a change in tone.

There's plenty of good messages squeezed into this book too. The age-old Spiderman mantra - great power, great responsibility. And also a bit about believing in yourself, which never goes astray. The price on this is great for a licensed children's book. Any pint-sized Spiderman fan would be thrilled to receive this book.

First of all, this book wasn't as good as the one about the Green Goblin, there was quite a few violent images, and the story didn't have the "this is a good book" feel to it, so I didn't have the urge to read the book again. The cover is okay, but the blue background doesn't fit well with the colours of Spider-Man, it makes him look a little off. The story was good though, it did have some enjoyment in it, but it's the images that I don't like as much.

Near the beginning of the book, the pictures of Dr. Oc were a little weird, they made him seem unusual, but the others were fine. I don't think that this book is very child-oriented, due to the violent scenes, so if the authors could find a less violent way of displaying some of the scenes, then maybe the book would become more suitable for young children.

I think that the appropriate age group would be 10-14, since the book has more action - some kids who are 2 years into being teenagers might find this book a little more interesting. As for price, very good, it fits the book's quality like a glove, so I'm going to give that aspect a 10/10! I hope that you enjoy the book, but yeah, it isn't very good for young kids, sorry.

This is a short picture book with very colourful glossy illustrations on every page depicting Peter Parker's latest adventure. Having just finished reading the Origin of the Amazing Spider-Man in chapter book form (see review on this site), I am already feeling some empathy for the teenage Peter and these books seem to be aimed at that. In the past, reading the comics and seeing the movies etc I have always thought of Spider-Man more as an adult than a teenager but these books are definitely written in a way that helps you connect with Peter as a person. I suspect that that means that they will really connect with their target audience of young male readers.

This book is about Peter working at the Daily Bugle Newspaper whilst still studying at Midtown High School. On every page one or two words or a sentence will be emphasised in bold blue writing. Peter needs to get photos of Doctor Otto Octavious (Dr Octopus) but in trying to do so learns a valuable lesson in not giving up and what it really means to be a hero. These books manage to throw in a few value lessons along the way!

The one thing I didn't like about this is that Spiderman has a "smashing right punch" which is illustrated towards the end of the book. Violence is bad enough but I am not sure it is necessary with this age group to describe the violence and then illustrate it so graphically. If it hadn't been for these two pages I would have given this 10/10 under all categories but this depiction I felt glorified and justified violence. I probably wouldn't recommend this unless you don't care what messages your child picks up. I won't be reading this to my children as it isn't the impression of the "friendly neighbourhood Spider-Man" I want in my house!!