The Amazing Spider-Man vs the Green Goblin review 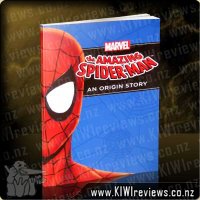 Spiderman. With great power comes great responsibility. Chapter book Based on the story by Stan Lee and Steve Ditko.

Okay, this book might have looked a bit boring at first, but now I think that it is AWESOME!!!! The cover is okay, it's nice and simple, but it still has some cool features: first, the spider-man picture. At first I thought it was only spider-man, but when I turned the book over, I was amazed to find that only half of it was spider-man, and the other half was Peter Parker, the guy who became you-know-who, so it really shows the "separate personality" side of things. The other cool thing is the web pattern for the background, it is seen best when light is shining on it since it's a transparent image, so it really looks a bit like a real web which you only notice when there is light on it.

The story is great, it is a lot like the movie Spider-man, but it had some parts that were different. The pictures were awesome, they weren't exactly realistic, but it is very cool, the images give you a bit of the emotion in each one, and I love the whole "painted" look. I enjoyed reading the story even though I'm almost 12 years old, in fact I've already read it twice and I still want to read it again! I found that this book was descriptive enough to make a picture in my head, and then that picture became a mini-movie, so not only was I reading a book, but I was also watching a fun animation at the same time, and if most kids have this happen to them when they read books, there is a 99.9% chance that they will get double the enjoyment! The story is good for kids about 8+, for there is no bad language or any disturbing parts, it is a kid story if I ever saw one.

The price matches the quality perfectly, I would have though it would be bad if the book was, let's say, $5.00, it is the $13.00 that tells you that the book isn't a bad one that they've made cheap so that they could get rid of it faster, so when you see a price like the price of this book, chances are that what you are buying is of good quality. Overall, I would say that this book is one that your child would like very much, and probably read again, and again. Enjoy!

Wow I was totally engrossed in this book. It is a colour chapter book with 64 pages telling the origin story of how Peter Parker became Spider-Man and how he decided that he would use his powers for good (in case you don't know I won't ruin the plot!).

Almost every page has a really well illustrated picture (the pictures are glossy). There are 10 chapters so you could eke this out in a nightly reading session, or your nine year old (or so) will enjoy reading this himself over and over again.

I am going to be on the look-out to see if the story continues in chapter book form but otherwise do read my reviews of the Amazing Spider-Man and his adventures in picture book form.

I am already planning on buying a few of these to give as gifts to some Master 6 years and up because I love this so much.

A brilliant chapter book of a much known comic strip character retold in such a simple and easy to read way. If you enjoy super heroes at all then this is definitely a must have for the collection. A very good quality book.