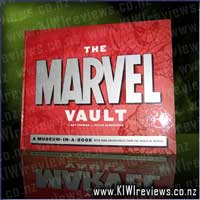 Disclosure StatementFULL DISCLOSURE: A number of units of this product have, at some time, been supplied to KIWIreviews by Bookwise Intl or their agents for the purposes of unbiased, independent reviews. No fee was accepted by KIWIreviews or the reviewers themselves - these are genuine, unpaid consumer reviews.
Available:
In All Good Bookstores

'The Marvel Vault' brings the universe to you, sharing the insiders story of Marvel Comics from 1939 to the present. Chock-full of historic and never-before-seen memorabilia (think: early sketches of Sub-Mariner and the Human Torch, Bullpen birthday cards, and a membership certificate for the Merry Marvel Marching Society), this vibrant chronicle contains over 30 plastic-encased archival gems that you can hold in you hand while reading about the artists, writers, and heroes who make up the Marvel Universe.

Whether you've been collecting Sub-Mariner dime-books since the 1940's or have just started to crack the pages of current Spidey Sagas, you'll want to gear up for Marvel-ous adventures with this dynamic collection.

I am a Marvel fan, ever since I saw the first episode of the original X-men cartoon series, I was hooked. Before then I wasn't really into comics and comic related stuff. I knew as much as everyone about Spiderman, Superman and Batman, but good ol' Wolverine got me interested. All the pictures I drew from then on were of X-men characters, I bought the action figures (remembering I was about 10) and collected the trading cards of which I'm still 4 cards short of completing the series which still erks me a bit. I will complete it one day haha.

The more I got into it, my knowledge started to grow and I learned about Marvel and other comic firms such as DC comics, where Superman and Batman came from. By now my interests had moved to more of the art side of comics, and I am building up a collection of books to do with the development of the art and illustration techniques as I plan to become an illustrator, so I was very interested in this book which looks at the history of Marvel.

The book is well presented as a ring bound hardcover. The cover is matt finished in traditional marvel red with heroes scattered over it in gloss with logo dominant, simple design but I like it. The book flows well from the very beginning of the company in the late 1930's to present day. Its amazing to see how the art has changed, not that it was ever bad but its clear to see the illustrators have experimented and tried new techniques to convey emotions and add emphasis to the stories, at the beginning it was very literal and straight forward which now gives them a humorous feel.

The book also looks at who those illustrators are and who the big bosses were and how they came, and left Marvel, and from reading through it seems it wasn't always a smooth running outfit. Probably the highlight of the book, which is sub-titled as a museum-in-a-book, is the examples of original art works and collectables included. It has things like sketches of the Sub-Mariner, and a young Wolverine, postcards, certificates and club membership cards from the Merry Marvel Marching Society. And my personal favourite, a re-print of the No-Prize Book which was a collection of all the mistakes in comics that readers had written in about.

This is a good book for all comic fans to have and not bad value for money with all the extras the book has. I have seen this book for sale for $120, so at this price I reckon you should get into it!

Unwanted by his parents, Cosmo Hill is put to work by the state, testing highly dangerous products. Cosmo realizes he must get away, and escapes with the help of the Supernaturalists, a group of kids who have the same special abilities as Cosmo - they can see supernatural Parasites, creatures that feed on the life force of humans.

The Supernaturalists patrol the city at night, hunting the Parasites in hopes of saving what is left of ... more...