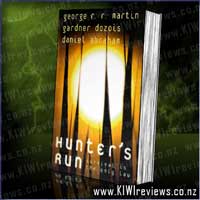 Disclosure StatementFULL DISCLOSURE: A number of units of this product have, at some time, been supplied to KIWIreviews by HarperCollins or their agents for the purposes of unbiased, independent reviews. No fee was accepted by KIWIreviews or the reviewers themselves - these are genuine, unpaid consumer reviews.
Available:
October 2007

A powerful tale of betrayal, trickery and sheer human grit, from a dream-team of authors.

Ramon Espejo awoke floating in a sea of darkness. For a moment, he was relaxed and mindless, drifting peacefully, and then his identity returned to him lazily, like an unwanted afterthought...

A European diplomat on a crucial mission is stabbed in a fumbled attack by local thug and prospector Ramon Espejo. Now, Ramon is on the run for his life, heading into the backwaters of a land so far only glimpsed from the depths of space.

From the hills of Mexico to a strange and alien world, Ramon has barely scraped a living prospecting for precious minerals. but this time he finds something else, something terrifying. or rather, it finds him, and uses him as humans are used by species more intelligent than themselves.

But Ramon is about to demonstrate what it is to be human, and to discover his function in the broad flow of the universe...

There is old wisdom about such things... Too many cooks will spoil the broth... Too many chiefs, not enough indians... A crowd of headless chickens... and alas, that concept has a parallel in the literary world, but I don't know a nice witty, succinct cliche to cover it... but basically, having three top-gun authors working on a story that has spent 90% of it's life sitting in drawers or under piles of other stuff, only to be brought out and rewritten, tweaked, fiddled with... it's too much!

This is a tale with a lot of potential. Some sharp characters, some excellent twists, and a wonderful basic concept... but it's been overboiled until it's soggy and limp! The main character, Ramon... he's a nice guy when he's out in the wild on his own. In tune with the wild, savvy in the ways of survival, peaceful at heart, but with a spine of steel and fists of stone... but get him in towm, surrounded by 'civilised' people, and he's out of his comfort zone... drinking to excess, violent, agressive, full of testosterone and bravado... basically a jail-term waiting to happen. Then he kills a man... a powerful, influencial man... and now's he's so far in the brown-stuff he's got to grow gills, or run... so of course, he runs...

And he runs right into the wrong place at the wrong time... gets in exactly the wrong kind of trouble, and wakes up to find himself not at all who he thought he was... and later on gets a perspective on his life that gives him much to think about, and possibly a second chance to make a better life for himself...

But how does this all come about? In a very long winded, very drawn out, highly improbable manner that left me struggling to stay reading! As with all good 'humanity out in space' stories, there are powerful aliens... but the most powerful ones are only spoken of... we don't get to really 'meet' one until the closing pages... and the other bunch, well, they start off looking like perverts, become victims, and then potential allies!

Overall, sorry to say this is not one of my favourites, despite the awesome potential it had.

When the family's rubber-plantation servant girl is dismissed for unnamed crimes, it is only the latest in a series of precipitous losses that have shaken six-year-old Aasha's life. In the space of several weeks her grandmother dies under mysterious circumstances and her older sister, Uma left for Columbia University, gone forever.

Circling through years of family history to arrive at the moment of Uma's departure - stranding her ... more...