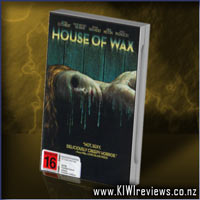 Disclosure StatementFULL DISCLOSURE: A number of units of this product have, at some time, been supplied to KIWIreviews by the company for the purposes of unbiased, independent reviews. No fee was accepted by KIWIreviews or the reviewers themselves - these are genuine, unpaid consumer reviews.
Available:
February 2006

SEE PARIS DIE. Well that was the tag line that introduced this movie to the world, but the movie itself proves more than just an excuse to watch the death throws of an over-exposed celebrity (as she was at the time). A remake of the 1953 classic, filmed in Australia but set against the back drop of a road trip through nowheresville America, a group of friends on the way to a football game suffer car trouble and end up in the town of Ambrose - a seeming ghost town apart from a handful of locals and a sense that things aren't quite as they seem.

The film itself is a typical mindless B grade horror flick. The sort of movie you can sit and watch and not have to think too much about along the way, but still enjoy yourself. I'm a fan of this sort of movie so would definitely recommend it for a movie night with a couple of pizzas.

There are not many movies that give me the creeps, or make me want to fast-forward past some of the 'messier' bits... This was one of those movies... -shudder-

An interesting concept, the conversion of human skin into a wax-like substance by utilising a strange and unindentified chemical cocktail... after totally immobilising the person by the use of drugs... very reminiscent of the only other movie to give me the screaming heebies, 'Anatomie', whrein people were injected with a chemical compound that slowly solidified and plasticised the flesh after injection, allowing the 'surgeons' to... for lack of a better term, sculpt the body into a revealing and detailed cut-away of the entire biological machine, layer by layer. (Incidentally, this is very similar to a real exhibition that has been in the news recently... a disturbing connection.)

Anyways, back to the movie... The movie features 6 American highschool students who have automotive trouble while out camping, and who are slowly but surely drawn into the nearby town and converted to wax statues one by one. It's not a pleasant process... to watch, or, I assume, to go though... and it made my skin crawl. My finger was hovering over the frame-skip button throughout a fair portion of this movie, but it wasn't QUITE creepy enough to make me press the button. 'Anatomie' is still the only movie to hold that dubious distinction.

Sure enough, the movie has plenty of twists, a plot that keeps you guessing in some ways, but sadly, leaves many potential thrill-spots predictable, and thus devoid of tension. Still, I think it did a pretty good job of being a remake of a classic from the 50's, starring the ever-memorable Vincent Price.

Overall, though this one will stay on the shelf as 'A damn creepy movie' that I will probably re-watch when I can devote a bit more attention to it, and thus think my way past the 'freaky bits' a bit better. However, I must admit that I don't think I can use my mind to clear out one ultimately disturbing fact about the movie... It stars Paris Hilton... but I think I actually enjoyed her death scene... For those who watch it... despite the uncanny precision of the injury, I still think that he would miss that particular vital organ by a good 18 inches.

A Yorkshire Terrier, competing in a televised singing competition, is separated from her owner by an opportunist dog pound worker.