« The Secret Life of Pets 2 review

Warrior of the Altaii review 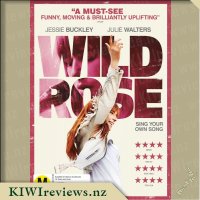 Rose-Lynn Harlan (Jessie Buckley) is bursting with raw talent, charisma and cheek. Fresh out of jail and with two young kids, all she wants is to get out of Glasgow and make it as a country singer in Nashville. Her mum Marion (Julie Walters) has had a bellyful of Rose-Lynn's Nashville nonsense. Forced to take responsibility, Rose-Lynn gets a cleaning job, only to find an unlikely champion in Susannah, the middle-class lady of the house (Sophie Okonedo). Wild Rose is an uplifting story about family, dreams and reality - and three chords and the truth.

Wild Rose is a movie with two themes which weave together to offer an intriguing glimpse into the stories behind show business. it is a drama first of all, tracing the career ambitions of a budding country singer. Music features prominently, often providing a commentary on the action, but never taking over: this is not a musical. But on a different note it is a coming-of-age account, despite the age of the main protagonist, Rose-Lynn (Jessie Buckley). Usually a film of this genre is based in adolescence and early adulthood, but the character of Rose-Lynn is that of an emotionally immature young woman whose raw ambition has driven her all her life.

I enjoyed Buckley's performance as the brash, know-it-all Rose-Lynn with her amazing talent. From the very start, the movie is all hers - her departure from prison is coloured by her feisty attitude. It is clear immediately that she is not going to fit into the norms of societal expectations; the artist within her is on a quest for fulfilment, and that leaves room for little else in her life. Her mother, Marion (Julie Walters) is very grounded, but Rose-Lynn does not appreciate how supportive she has been - and will continue to be. As the outsider, Rose-Lynn is bent on pursuing her own dream at the expense of everyone else. On her arm she bears the tattooed words "three chords and the truth". This quote originated with Nashville songwriter Harlan Howard many years before Rose-Lynn was born; it is no coincidence that her full name is Rose-Lynn Harlan!

The third protagonist, Susannah (Sophie Okonedo), is there for Rose-Lynn just as much as Marion. Between them they are the rocks that support Rose-Lynn. Sometimes Susannah is so understanding that I found myself getting annoyed at her: she is almost too nice! But Rose-Lynn's singing carries the story, making it possible for the audience to accept her bad behaviour in the interests of art.

At one stage in the movie, Rose-Lynn says she is like a transsexual who was born a man but was meant to be a lassie: in the same way, she was born Scottish but was meant to be an American. It is a strange analogy which does not quite work, but it sums up her discontent with Glasgow - which in her view is provincial and could never hope to match the glitz of Nashville. There is a wonderful long shot of downtown Nashville which echoes an earlier shot of Glasgow; both shots feature crowded streets, symbolising the similarities between the two cities rather than the differences. The nightclub scenes are beautifully staged, from the Glasgow Grand Ole Opry to the real thing in Nashville; again, the size is very different, but the ambiance is the same.

Although I was carried along by the exuberance of the music and the sheer spectacle of the film, I did find some of the events did not ring true. Rose-Lynn's transition from driven diva to responsible mother was too rushed; it was as if the director were hell bent on presenting a predictable happy ending. Real life does not work like that; cliches like happy-ever-after and there's-no-place-like-home are well and good in fairy-tales, but they don't work so well in dramas for grown-ups. Had it not been for Buckley's amazing singing, and the accomplished supporting performances by Walters and Okonedo, I might have left this movie feeling cheated. As it was, however, I found it easier to just go along with it and enjoy the ride. Schmaltz aside, there is some seriously good music to be enjoyed. And I would certainly see it again just for that. This is definitely not the last the world has heard from Jessie Buckley.

Caroline, a live-in nurse, is hired to care for an elderly woman's ailing husband in their home - a foreboding and decrepit Gothic mansion in the marshy backwoods just outside of New Orleans. Intrigued by the enigmatic couple and the dark and mysterious surroundings, Caroline begins to explore the old mansion.

Armed with a skeleton key that unlocks every door, she discovers a hidden attic room that holds a deadly and terrifying ... more...