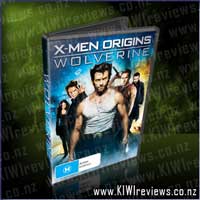 This pulse-pounding action thriller sinks razor-sharp adamantium claws into the mysterious origins of Wolverine: his epically violent and romantic past, his complex relationship with Sabretooth and the ominous Weapon X program that unleashes his primal fury.

Along the way, Wolverine also encounters legendary new mutants, including Deadpool and Gambit. Get ready for this deeper, darker, more-spectacular-than-ever chapter of the X-Men saga!

This movie has been one of my favourite movies; possibly because Wolverine has always been my favourite of the X-Men. Hugh Jackman has taken his casting as Wolverine seriously, and with every film that he is in, he embodies Wolverine more and more. At the point where this movie came out, I can't imagine anybody else as Wolverine.

But that's enough of saying Wolverine for the moment. The movie brings up the missing parts of Wolverine's (darn, I said it again!) history. The three X-Men movie that preceded 'Origins' have shown much conflict within the character, due to his lack of memories, and I was pleased to see it explained. Origin stories are generally hit-and-miss, but I feel this movie does it justice.

Wolverine has always been a recluse character, with a very short-fuse and stand-off attitude, but we get to explore his character more and fall in love with him even more (bro-mances are okay).

As would be expected in the movie, there is a lot of one-on-one hand-to-hand combat between practically immortal beings, which manifests in both epic boss battles and friendly rivalries. You get to witness an evolution within Logan (Hugh/Wolverine), as he switches between a lone wolf, and a team player. But ultimately you end up sympathising with the bad luck that this hulking, immortal, clawed man has been dealt.

This movie is action packed with moments of hilarity. It's easy to get invested in this character. I've watched this movie at least 25 times. And I still don't get bored. Highly recommended.

Another X-Men movie. That pretty much says it all, for me. It has the expected large amounts of fast-paced action and battle scenes, with plenty of X-Men doing their "mutant" thing. There is the typical "love interest", betrayal, and new mutants popping in for a small visit. Special effects... nothing really fantastic about them, nothing that hasn't been seen in many other action movies. While Hugh Jackman is still a damn good Wolverine and Liev Schreiber seems to fit the role of Victor Creed/Sabertooth pretty well, Ryan Renolds was rather annoying and weak in his role as Wade Wilson (rather normal for his roles I have found).

As a kid, Wolverine had always been my favourite of the X-Men, so I had been rather looking forward to this movie. It was at least interesting to learn more of Logan's history before he became Wolverine, although I never paid great attention to detail with the cartoon series, and never read the comics, so have no idea how close to the original story of Wolverine this movie really follows.

Quite a disappointment really... another "typical" action movie. Meh, as I said, just another X-Men movie. Those who have enjoyed the previous movies may enjoy this one, just don't expect anything more than "the same old".

An imaginative elephant named Horton (Carrey) hears a faint cry for help coming from a tiny speck of dust floating through the air. Although Horton doesn't know it yet, that speck houses an entire city named Who-ville, inhabited by the microscopic Whos, led by the Mayor (Carell). Despite being ridiculed ... more...