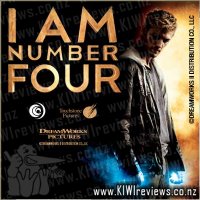 Disclosure StatementFULL DISCLOSURE: A number of units of this product have, at some time, been supplied to KIWIreviews by the company for the purposes of unbiased, independent reviews. No fee was accepted by KIWIreviews or the reviewers themselves - these are genuine, unpaid consumer reviews.
Available:
in cinemas from Feb 24th 2011

I am Number Four product reviews

In the small Ohio town he now calls home, John encounters unexpected, life-changing events - his first love (Dianna Agron), powerful new abilities and a connection to the others who share his incredible destiny.

Keeping in mind that this movie is aimed at a younger audience than I fit into, it was a real pleasure to take my son and his friend to the cinema to see it.

The plot is simple and pretty shallow... a strange echo of the classic 'Superman' tale really - aliens escape to earth and try to hide, but don't always succeed. Bad guys hunt them, get their butts kicked by superpowers, and of course the main alien character gets emotionally tangled with a mere human girl. However, despite the ultimate cliche plot, the execution of it is really well done - as one would expect from Disney, a company who has been successfully sparking our imaginations for decades.

Alex Pettyfer, perhaps better known for his embodiment of "Alex Rider" in the movie adaptation of 'Stormbreaker' by Anthony Horowitz, is now an alien refugee, hidden on our planet along with 8 other youths and their guardian warriors. Now being hunted down by bounty hunters from the Mogadorian species who invaded his home planet and slaughtered the entire race.

The Mogadorian commander is played by Kevin Durand, a very familiar face to any Stargate fan as the Go'ald Lord Zipacna, or more recently as the archangel Gabriel in 'Legion'. In this movie he does a pretty good job of once again being a sadistic swine bent on torture and destruction by any means necessary. In one scene - which I felt wasn't at all kid-friendly and decidedly UN-Disney'like - he 'plays' with a human using a rather disturbing torture device like a small metal ball with multiple spinning saw blades. And makes jokes about it to his team. For me, this one scene really took away the shine the movie had built up, and it was almost at the final fight sequence before I had stopped anticipating something else nasty.

Overall, the movie was a success, rest assured. Young boys will love the movie, even with two sigh-inducing 'kissy-face bits' in the latter half... the action is great, the special effects are pretty convincing, and the characters are well developed and very easy to 'get in touch with' - with perhaps the character of 'Number 6' - played by Teresa Palmer from "Sorceror's Apprentice" - who came across a little bit too harsh to easily empathise with. If you get the chance, take the kids... they'll love you for it.

Malcom Crowe is a child psychologist who receives an award on the same night that he is visited by a very unhappy ex-patient. After this encounter, Crowe takes on the task of curing a young boy with the same ills as the ex-patient. This boy "sees dead people". Crowe spends a lot of time with the boy (Cole) much to the dismay of his wife. Cole's mom is at her wit's end with what to do about her son's increasing problems. Crowe is the boy's only hope.