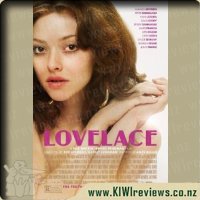 Disclosure StatementFULL DISCLOSURE: A number of units of this product have, at some time, been supplied to KIWIreviews by Roadshow (NZ) Ltd or their agents for the purposes of unbiased, independent reviews. No fee was accepted by KIWIreviews or the reviewers themselves - these are genuine, unpaid consumer reviews.
Available:
January 2014

The film doesn't show much, a lot is suggested and left for you to imagine what was happening but I knew the gang rape scene was coming thanks to me getting impatient and googling. You lucky didn't see much apart from her been threatened if she didn't do what she was told and five guys coming into the room. The film focuses on the beginning of her "career" and life with Chuck Traynor and not that much is spent on her later life. I'm glad that she did manage to get away from her bully of a husband and she found true love and motherhood.

I knew the essence to this plot before seeing the movie, having thought about requesting it when it was on offer, in the end I did ask to swap for this with a fellow reviewer though it has taken me a while to get around to watching it, I finally got there in the end.

Lovelace is based upon the true story of Linda Lovelace and starts off showing her boost into fame and then shows the darker side to that life and how she gets out of it. There isn't much held back, it doesn't get too graphic but it leaves you with no doubt as to just what is going on or what is happening to Linda. The plot is decent and it is easy to follow with no major gaps leaving you confused.

Amanda does a great job playing Lovelace, with some actors where I have only watched them in one other film before (in this case it was Mamma Mia!) I find myself comparing the characters a little too much, but this time, other than thinking of it once, I didn't again. There are a couple of well known actors strewn throughout the film and all do a great job in their role. Well acted and well scripted.

Watching this you just feel so sorry for Linda. What she had to endure from her abusive husband no human should have to go thru and to find out at the end she died in a car accident is heart breaking. I am glad she remarried and had a child and found happiness for those last years. Only 17 days in the pornography industry Linda Lovelace performed the first scripted pornographic theatrical feature film, featuring a story and some jokes.

In trouble with the law Chuck forces his wife Linda in to prostitution which evolves into making a movie. Dollar signs is all Chuck was focused on and whatever it took to bring that money in was all that mattered to Chuck. Hiring her out for the night, or renting her to a room for a quick buck there were no lines he would not cross and if she resisted his fist was not far away.

The movie is tastefully done - you do not witness any real lewd acts. A lot is left to your imagination. An all star cast makes the movie very compelling. I do not know if is was the actual character or not but I found Amanda's look very simple and vacant at times.

At first you think Linda is enjoying life. Admired by so many. Talked about on tv and radio. Invited to parties everywhere including Hugh Hefners. But as you watch her fictional life you see what was truly happening behind the scenes and how she had to hide the abuse she received from her husband. The scene where she runs to her parents house to ask for help is so depressing, telling her mother he hits her just for her mother to respond by saying she needs to obey him and do everything he says.

Your heart goes out to her and the struggles she went thru, especially the fact she had to sit thru a polygraph test just to get her story out.

From master story teller, Guillermo del Toro, comes THE SHAPE OF WATER - an other-worldly fairy tale, set against the backdrop of Cold War era America circa 1962.

In the hidden high-security government laboratory where she works, lonely Elisa (Sally Hawkins) is trapped in a life of isolation. Elisa's life is changed forever when she and co-worker Zelda (Octavia Spencer) discover a secret classified experiment.