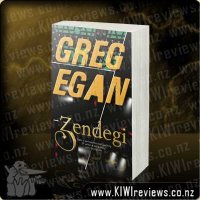 Disclosure StatementFULL DISCLOSURE: A number of units of this product have, at some time, been supplied to KIWIreviews by Hachette or their agents for the purposes of unbiased, independent reviews. No fee was accepted by KIWIreviews or the reviewers themselves - these are genuine, unpaid consumer reviews.
Available:
September 2011

Nasim is a young computer scientist, hoping to work on the Human Connectome Project: a plan to map every neural connection in the human brain. But funding for the project is cancelled, and Nasim ends up devoting her career to Zendegi, a computerised virtual world used by millions of people.

Fifteen years later, a revived Connectome Project has published a map of the brain. Zendegi is facing fierce competition from its rivals, and Nasim decides to exploit the map to fill the virtual world with better Proxies: the bit-players that bring its crowd scenes to life.

As controversy rages over the nature and rights of the Proxies, a friend with terminal cancer begs Nasim to make a Proxy of him, so some part of him will survive to help raise his orphaned son. But Zendegi is about to become a battlefield ...

In a parallel universe where VR wasn't discarded as 'too hard to commercialise' - and let's face it, VR will never really get up and fly again after two false starts over the last 2 decades - we find ourselves exploring the lives of a pair of people from fairly-different walks of life who give up their comfort-zones in the hope of making a better life for others. In one case - that of reporter Martin Seymour - it's the life of his young son, Javeed. The other is Nasim Golestani, a young but very talented woman with a vision, but also a strong sense of family and drive to make her mark on the world. Their paths cross in Zendegi - a virtual world much like any big MMORG of today, but which runs on a more Muslim/Arabic set of themes and in full-immersion VR pods called 'Castles' (or Ghal'eha in their own terms) - little more than inflated spheres running on omni-directional treadmills, with a set of wireless goggles that handle the audio-visual input and output.

Through a series of insights and innovations - and a lot of personal sacrifice by both of our protagonists - Zendegi evolves from a playground into the birthplace of something radically new... and then becomes a graveyard in more ways than one. Lives are lost, hopes and dreams blossom only to wither again, and revelations burst open at the merest hint of intent. I must admit, though it's not a patch on the cyberpunk world invented by William Gibson, this world is still very real, gritty, and prone to heartache and mayhem. The characters are real enough to empathise with, and carry a depth that makes them all very believable in the areas that matter, without drowning us in too much extraneous detail.

Overall, though this book SOUNDS very heavy on the 'SCI' and light on the 'fi' - the opposite is true. There is little in the way of technical details and a lot more in the way of drama and 'people plot' - this is drama for the modern age,without taking it too far into then future as to lose touch with the realities of our strife-laden world and in particular the Middle-East region. This book really took me by surprise, in that it wasn't at all what I expected, but impressed me with how good a read it was just the same.

Following on from the first two Revive Cookbooks, this book features even more healthy and delicious recipes. Inside you will find enlarged sweet and soup sections and a new breakfast section. Revive's delicious vegetarian food contains whole grains, plant-based protein, fresh produce and virtually no processed sugars or flours. All recipes in this book are dairy and egg free and most are gluten free.