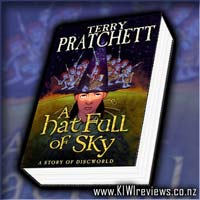 Disclosure StatementFULL DISCLOSURE: A number of units of this product have, at some time, been supplied to KIWIreviews by the company for the purposes of unbiased, independent reviews. No fee was accepted by KIWIreviews or the reviewers themselves - these are genuine, unpaid consumer reviews.
Available:
June 2004

Oh, yes. And the Nac Mac Feegle - the rowdiest, toughest, smelliest bunch of fairies ever to be thrown out of Fairyland for being drunk at two in the afternoon. They'll fight anything...

The sequel to the very popular and funny Wee Free Men, this tale once again brings us into contact with the notorious blue pictsies and their 'ex-hag' Tiffany, once betrothed to The Man Yan of this particular mound of Nacs, Rob Anybody and thus the Kelda (nominal matriarch) of the mound. Here there are once again thrown together to hold the barrier between worlds and keep the Discworld safe from invasion from another world passing by.

This time they have help in the form of Mistress Weatherwax, the poster pin-up Witch of all Witches. What Esme Weatherwax doesn't know about magic and Witchery, what she hasn't accomplished with her mastery of all things occult, could be listed on the back of a Nac Mac Feegle with a vivid marker. Even so, it will fall to Tiffany to give the final stroke that will either save or doom the world... which is a bit of a harsh gig to give an 11 year old girl, but that's what needs to be done.

Once again we are reminded that the world is willing to come to an agreement with someone if they only think about what they need instead of just jumping for the brightest, noisiest, easiest way of getting the job done. "It's all headology, how you think about it, not what you wave about."

Overall, a witty, insightful sequel full of sparkling humour, thought-provoking storyline, and a lot of hidden layers of laughs, if you only look and think about it. As with all of Terry's books, if you do a bit of research you can uncover a lot more than you first thought was there.

Create your own mosaic masterpieces with this amazing magnetic kit!

Take a look inside the fantastic book that's packed with original ideas. From the simple and silly to complicated and clever, there's something for everyone.

With a magnetic board and colourful magnetic tiles included in the kit, you can get started straight away.