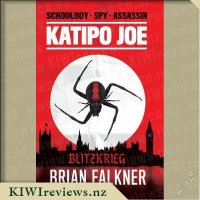 Disclosure StatementFULL DISCLOSURE: A number of units of this product have, at some time, been supplied to KIWIreviews by Scholastic (NZ) or their agents for the purposes of unbiased, independent reviews. No fee was accepted by KIWIreviews or the reviewers themselves - these are genuine, unpaid consumer reviews.
Available:
April 2019

Joseph St George is a young New Zealander, the son of diplomats in 1930s Berlin. But the Nazis are on the rise and the world is on a spinning path to destruction. Joe's world is about to change, violently. After a narrow escape from Germany with his mother, Joe is recruited by M15 and given a mission to infiltrate the Hitler Youth movement. From vital convoys across the frozen North Atlantic, to the terror of the London Blitz, to the shadowy world of the French Resistance, this is Joe's world. Inspired by true events, Katipo Joe is a story of incredible heroism, unlikely friendships and unbearable tragedy, set against the backdrop of World War Two.

Since I was already familiar with other works by Brian Falkner, and have a particular interest in the history of the second World War, I was looking forward to reading this novel. Even more interesting was the background to the story: it is inspired by true events. Had I not known that prior to reading the book, I would have thought that some of the things that happened to Joe were improbable. It is certainly a case of truth being stranger than fiction - although there was undoubtedly some poetic licence taken to ensure the events rolled out smoothly.

The book is told via flashbacks and flashforwards. This could have been daunting to a younger reader who might not be familiar with stories told in a non-linear fashion, but almost every segment is prefaced by a date and place reference together with a related quote from different sources - mainly the "memoirs" of the main character, Joseph (Katipo) St George - although others quoted include Winston Churchill, Joseph Goebbels, various contemporary media sources, and popular songs. These quotes appear against a background graphic of a folded page, weathered and creased from being stored in the pocket of a wartime jacket. This organisation makes it possible for the reader to negotiate Joe's story with little difficulty.

The story itself is fast-paced and full of strong action, some graphically described so as to leave no illusion that war is anything but a deadly game. The protagonists are well fleshed out; Joe's three young English friends are described so vividly that it is hard to imagine that they were not real people. Indeed, they represent the many youngsters who would have lived in similar fashion, risking their lives to survive in unbelievably difficult conditions. They make no apologies for being rough and ready; in their world, there is no place for such formalities. In similar vein, Joe's friends back in Germany are presented warts and all, complete with their antisemitic beliefs and aspirations to join up with Hitler Youth because of the glorious experience it offered. Despite their radical hatred, it is possible to feel a glimmer of empathy for them as Joe struggles to evaluate his own feelings and attitudes.

Although the story is aimed at young adults, a capable intermediate-school aged reader would be able to enjoy it. There is nothing in the book that would be unsuitable for a bright 11- or 12-year-old; the sequences that deal with death are not gratuitously violent. There is the opportunity, indeed, for a younger reader to extend his or her own knowledge of world history and to raise any questions with an older family member or teacher. I am going to pass it on to our ten-and-a-half-year-old who is an accelerate reader, but will also be encouraging him to talk about it if he finds any of the content upsetting. I don't think he will, but the offer is there just in case.

Although the story is compelling and I cannot recommend it highly enough, there was just one thing that let the book down - and that was the proofreading. There were several misprints which annoyed me, both in the English text itself (Mickey Mouse being spelled two different ways within the same paragraph; the Goldstein twins suddenly and inexplicably changing their surname to Rabinowitz; Joe in disguise as an American boy describing a German footballer as being famous from "Alaska to Hawaii" although neither of these was part of the USA until the late 1950s.) When the building on Avenue Foch explodes, a cloud of dust envelops Joe and the others. The misspelling of "envelops" completely alters the intended meaning.

There are also some anomalies in the German text. Sieg Heil is written as Seig Heil, and Wehrmacht is consistently written as Wermacht, a usage I have not come across before. Judegeliebter does not quite carry the intended meaning of "Jew Lover" - Geliebter is a passive description meaning someone who is beloved, not a person who loves others. Again, that changes the meaning. It may seem picky to single out these instances, but the story itself is so good and so well written it is a shame that these errors have crept in. As a German speaker, I also found it strange that some words (Soldatenkinos and Kubelwagen among others) were written in lower case as all German nouns begin with a capital letter.

In summary - a great read with a bonus kiwi connection for New Zealand readers. I also appreciated the inclusion of archive black and white photographs at the end of the book because they added to the impact of the story. I believe Joe's exploits would translate well to the big screen; I would be interested to see if a film is planned for some time in the future. I think those who have enjoyed the book would welcome revisiting Joe's adventures in movie form.

Magpie is cross that she can't fly like her friend Brown Falcon. She thinks of mean tricks that will make Brown Falcon look silly.

But she goes too far... and finds out just how much friends need each other.