« The League of Extraordinary Gentlemen review 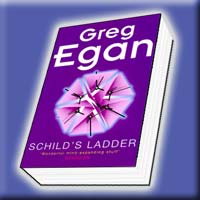 Cass has stumbled on an entirely different kind of physics. And she has travelled to a remote experimental facility in the hope of bringing the tantalizing alternative to life.

The experiment is wildly successful: the novo-vacuum is more stable than the ordinary vacuum around it, and a region in which the new physics holds sway proceeds to expand at half the speed of light. Six hundred years later, and more than two thousand inhabited systems have been lost to the novo-vacuum.

People have come from throughout inhabited space: most are Preservationists, hunting for a way to stop the novo-vacuum before all inhabited space is consumed, but a few believe that the challenge of adapting to survive on the far side of the border would invigorate a civilisation that has grown stale and insular...

There should be a label on the front, in big, bold lettering, it should say:

Unless you at least have a basic grasp of quantum physics in some form or another, and at least a good solid grasp of first year uni chemistry and physics, you'll find this book hard going in places.

Being a somewhat diverse science buff, I found this book rather a pleasant wander in a hypothetical universe, millenia away from our tedious little lives of today. Humanity has become something so dissimilar from what we know of ourselves today that all of the high-brow physics treated so casually by the characters, could be right, for all we know.

However, I still found it a slog in places, so the re-readability factor is quite low. I would have to be in a very thoughtful mood to want to pick this one up again.

If you are able to put your mind in the world built by Egan, the characters are very well suited, true to nature and function. But it takes a while to build up that worldview, so you might get bogged down by the first 3 chapters.

Overall, I quite enjoyed this book.

"I crawled onto the bank and collapsed, exhausted. From the dirt, I looked up in amazement at four dogs staring down at me. Was I dreaming? Had I gone mad? It all seemed very real. 'You guys saved me!' I said, as I sat up in my dripping clothes. 'I owe you.'"


When disaster separates Gwen from her family, she must fend for herself, all alone in the wilderness. Luckily, she's not alone for long... When a ... more...