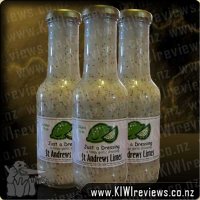 Disclosure StatementFULL DISCLOSURE: A number of units of this product have, at some time, been supplied to KIWIreviews by St Andrews Limes or their agents for the purposes of unbiased, independent reviews. No fee was accepted by KIWIreviews or the reviewers themselves - these are genuine, unpaid consumer reviews.
Available:
at selected quality retailers and via online store

An addictive dressing for just about anything... a sweet, garlic vinaigrette which you must hide from the unconverted! Ideal on seafood.

WOW... as soon as i got this i found myself back at the fridge dipping my finger in for another taste! The garlic really dominates this dressing, its so hard to find a dressing that has an authentic garlic taste ..... this just hits the nail on the head!! There is also an underlying zingy taste due to the lime - yet lime taste isn't strong.

I loved this and would buy it again in a flash! I can't wait to try it on other meals, we used it on out green salad tonight. I hope its stocked at my local supermarket or i will be ordering it online. I love that its gluten free, as i often have a friend for dinner that requires gluten free meals.

The only issue i have is that it leaves an oily texture on your lips afterwards. I minor flaw in its overall taste sensation!

Now I really enjoyed this dressing almost as much as I did the Saffron Lime Dressing and though the ingredient list is almost identical, this was, for me at least, lacking a little something. I could taste the sharpness of the vinegar, I could get the garlic as well... but for me it just needed a little something extra. And then I figured it out... salt!

The Japanese discovered centuries ago that the best foods carried a flavour from all the major taste groups - sweet, bitterness, sour, salty, and umami (previously known in the Western culture as 'savoury'). This dressing lacked a touch of saltiness that would have rounded it out beautifully. So... I decided that if the dressing was lacking, the food must supply... so it was time to try some dishes.

After a number of experiments including pan-fried hoki (very tasty), salad with salt-encrusted croutons (pretty good), stir-fry with soy sauce (almost perfect except the creaminess of the dressing made the food 'feel' strange), I found the food that worked for me... Bangladesh Biryani Rice with chunky tuna on top. Perfection.

I did try this in mashed spuds, but either I didn't use enough (don't want to waste it, after all) or the variety of spuds used weren't suitable, but I just didn't get anything beyond a slight hint of garlic coming through. More than likely not the fault of the dressing... better than even odds the fault lay with tastebuds that have suffered years of abuse at the hands of chilli sauce and too many rich curries.

Overall, though this was my second favourite, it's still a quality product well worth hunting down, or better yet buying in bulk direct from the manufacturer. If you want something with a bit of difference to dress those salads throughout BBQ season, this is one you seriously need to try, even if only once.

This must be one of the yummiest dressings I've ever tried, it's got a wonderful garlicy tang to it and honestly, I was reaching for more salad just to have something to put it on! I took this along to a family dinner and since I only bought home half the bottle, it was easily the popular choice. I also discovered that mixing this through mashed potatoes gives it a wonderful creamy smooth tang that really went down a treat.

For me, the only downside with this is that like many dressings it's not the most calorie friendly however that wouldn't stop me from regularly treating myself to this drizzled over a yummy fresh garden salad. Think this will be appearing on our table regularly over summer.