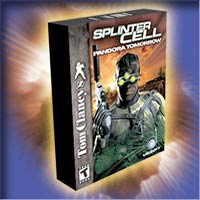 2006: The U.S. installs a temporary military base on East Timor to train the developing defense force of the "world's youngest democracy." Resistance to the U.S. military presence in Southeast Asia is widespread and passionate, but the threat Indonesian militias pose to East Timorese democracy is deemed sufficient justification. At the same time, the U.S. doesn't mind having an excuse to install active military personnel within easy reach of both North Korea and the largest Muslim population in Asia.

Anti-U.S. resentment comes to a head under the leadership of guerrilla militia leader Suhadi Sadono, acting with the unofficial support of major corrupt factions of the Indonesian government. Suhadi's men attack and occupy the U.S. embassy in Jakarta, taking dozens of civilian and military personnel hostage.

You are Sam Fisher. You're sent in, not to rescue the hostages, but to destroy top-secret documentation held in the embassy before Suhadi's men access it.

The New Dawn of Stealth Action - An Experience So Compelling You Feel It!

Pandora Tomorrow continues the exploits of Sam Fisher, an agent of a top-secret organization known as Third Echelon, as he is once again called upon to save the world from homicidal megalomaniacs.

The graphics can be summed up in a single word, gorgeous, the lighting and shadows are very well done and really add atmosphere and depth to the environment. Unlike most games however, the fancy lighting isn't just eye candy, darkness is your friend, a warm blanket that keeps you safe. If your enemies weren't afraid of the dark, they soon will be.

In case you haven't guessed, stealth is the primary element of this game. While you can kill your enemies there are several missions that don't allow lethal action to be taken, but don't worry, there are non-lethal ways to dispose of prying eyes.

Sam has a huge array of animations at his disposal. The only complaint I have here is when creeping up to a low ledge while crouching, Sam stands, steps up, and then crouches again. A custom animation could have potentially eliminated this small annoyance but apart from that the animations are very well done.

What would a spy be without his toys. Sam has access to two silenced weapons, a pistol with laser aiming, and a SC-20K with telescopic sight. Sam's goggles have two modes that allow him to see heat signatures, and in the dark. Other goodies include flash bangs, fragmentation grenades, flares, lock picks, wall mines, and non-lethal ordinance for the SC-20K.

The only complaint I have here is with weapon aiming, the weapons accuracy improves the longer you hold it still, as soon as you move the accuracy goes down the toilet. I understand the emphasis on stealth, but when the proverbial hits the fan I want to be able to shoot whoever gets in my face, I mean, how could a highly trained operative miss someone standing five feet away. When sniping with the SC-20K you need to hold your breath to stabilize the crosshairs before you take a shot, that's fine, I don't expect to be able to hold the gun perfectly still, but the crosshairs wave around like your trying to take a shot in a hurricane. The weapon inaccuracy doesn't make much sense, I can only assume they didn't want the game being played like a FPS, which is unlikely anyway as the ammo is limited.

The interface and controls are very easy to use, which was nice considering some games require you to have a degree in quantum mechanics just to open your inventory.

Overall, Pandora Tomorrow is a great game which requires a little thought while playing, unlike your average FPS game. The key to this game is patience, watch the guards patrol patterns, study your surroundings, look for the unobvious, and when you need to pull the trigger, one shot one kill.

See you in the shadows.

We Sing Robbie Williams embodies the popstar's musical journey and features 25 tracks from the chart-topping artist, accompanied by all the original videos making it a true celebration of the British born, multimillion selling pop star.