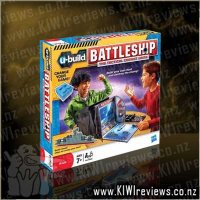 You build the game! Build your own Battleship, Aircraft Carrier, Destroyer, Submarine and PT Boat brick by brick. Build them our way, or create your own! Then, call out the shots. Hide your ships and fire your weapons! Was it a hit or a miss? Destroy all of your opponent's ships to win! Change your game by bulking up your fleet; build heavily armed super ships, any way you want!

Build your own fleet and destroy the enemy! Build classic ships or create your own!

Frankly, I was very dubious about how this one was going to pan out - I mean, other than allowing a higher degree of 'assembly required', how could you make a 'U-Build' version of this game?! Well, it seems they found a way, and one that allows a lot of scope for creativity, without letting the game get beyond playability.

Assembly is simple enough - nothing particularly tricky or adult-required about it, except perhaps the first time the boards are assembled - just to prevent enthusiasm getting the upper hand over practicality, and a weak joint getting torn. Assembly of the ships is no harder than any simple Lego or K'Nex-style kit - the very simple, easy to read and image-oriented assembly instructions give kids all the guidance needed.

After that, the gameplay is as familiar as it ever was, with the only differences being that firing is done per ship, not per shot... so a standard aircraft will fire up to five shots in a single barrage - depending on whether it has suffered any damage in previous rounds, and shots are declared and marked by blue pegs prior to any hits being registered.

The customisation options are great, but after discussions with other fanatic gamer players, two other possible 'custom rules' were put forth... 1 - ranged weapons, and 2 - movement. Each weapon-type would be assigned a 'range' and 'scope' eg. Missiles could reach anywhere on the board, but torpedoes could only hit targets within 3 squares straight-line of the launching ship (ie. No diagonals or dog-leg shots would be valid). With movement, ships would be given a movement score. Simply done, Movement = 6 minus the locator-plate number. So an aircraft carrier could move 1 unit per round (6 minus the Locator Plate score of 5). Points would be used to move the ship either forwards, backwards or a turn of 90 in either direction. A smaller ship with a score of 3 could either cruise forward 3 squares, or move forward 1, turn hard-left, and then move forward 1 more square... effectively moving it diagonally and turning it. These would allow more realistic combat to be played out... and keep it exciting for longer.

Overall, though it's a new spin, it's the same game but with an added dimension of fun, in that the kids can 'mix it up a bit' and give the ships more, or less, firepower than the basics... which allows for some supership combos. However, I like that the ship's 'critical failure' point is always the smallest number - either the number of guns, or the number of grid squares it occupies. This keeps the superships from being TOO super. On a side-note, for those who love to build starcraft out of Lego... the little 'fighter jets' make awesome little shuttles, escape pods, or drone missiles!

I like Battleships, from the basic pen and paper version, through to the electronic version, I also liked the DIY version of Monopoly, so I thought what better that a DIY Battleships using Lego type pieces to build your ships?

Well it's a good idea, but like any good idea it had it's 'Hits' and it's 'Misses'. Before I get on to those pluses and minuses let me update you on a couple of changes to the rules for battleships. First off it's no longer a 1 shot per turn game, instead you nominate what ship you want to fire with, and then you get as many shots as the ship has weapons on it. For example the standard Battleship as designed in the game has 5 weapons (4 guns, and 1 missile launcher), so if you nominate this ship then you get 5 shots for that turn. Now this may sound a little unbalanced you might say, well Hasbro have thought of this and this is where another rule change comes into play. Each time a ship is hit, it loses a weapon and can take one less shot for each weapon destroyed. Now you might be thinking I know let's mix it up here and build a 3-space ship with 6 weapons (yes this is actually possible with the new Lego building pieces), that way I can fire six shots and take six hits before i'm sunk. Well unfortunately the new rules state that a ship is sunk when it has been hit as many times as its length or its number of weapons, whichever is lower, so say you stack your lower ships with weapons, but your Battleship has only two weapons, well sorry but that will be sunk after only two hits.

Now on to my good and the bad. Well the good is, I like the new rules, they make the game more interesting, and combined with the building your own ships, helps make this a far more strategic type game than it ever was previously. The bad is that everything, except the peg trays, pegs and ship pieces are made of cardboard and if you want to keep it all in the box then you will find yourself having to assemble and disassemble the game each time you want to play, and unfortunately this will damage the cardboard tabs that help hold it all together, now if only they had made the board game out of either some printed plastic, or even plastic with printed stickers on it would have been better.

So to sum up, despite the problems I see developing with the game boards it's still a thoroughly enjoyable game and it good for kids of ALL ages.

The deadliest, most efficient killing machines of the animal kingdom all get their moment of fame in this fascinating edition of Top Trumps. Predators rely on physical attributes that enable them to outrun, outfly, overpower, poison or overwhelm through sheer numbers to kill in order to survive. All except the deadliest killer of them all. Compare facts such as Height, Weight, Length, Speed & Killer Rating.