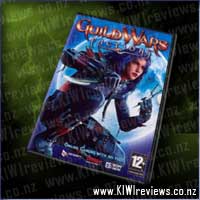 Two hundred years ago, the Betrayer, Shiro Tagachi, transformed the lush continent of Cantha into a devastated landscape of stone forests and crystalline seas. Now, in a land torn asunder by war, who you fight is as important as who you serve. While Kurzicks and Luxons battle for ever - decreasing resources, a horrible plague threatens the very existence of an empire still reeling from the betrayal that nearly destroyed it two centuries earlier.

Join with players from around the world to battle for the future of Cantha-a complex empire dominated by bureaucracy and strife, living under the shadow of an ancient evil.

This is my all-time favourite online game.

Originally, I started with Guild Wars (which was already awesome) and then moved to Guild Wars Factions.

This game has absolutely beautiful graphics - detailed, vibrant realistic colours, very immersive. The game characters are a decent size, and if you have a roll mouse you can quickly zoom in and out as well as right-click and spin the view around 360 deg.

You can play any of the 6 core professions from Guild Wars (Warrior, Ranger, Monk, Necromancer, Mesmer, Elementalist) as well as two new ones: Assasin and Ritualist. Actually, you chose a main and second profession, so you get opportunity to use a mixture of skills and spells. There are 4 game slots, allowing you to create and train up 4 different characters. I like the look of the female Assassin best, although my highest character is an Elementalist. They all look pretty good (and rather revealing in some cases).

There are plenty of places to explore and quests to undertake.

The user interface has some ergonomically good features, such as directional running using arrow keys (or the usual WSAD keys plus Q&E for strafing left and right). In addition, most of the keyboard is mapped as other useful hotkeys. This is so much better than constantly clicking a mouse button to get anywhere as happens in many other games. You can hit the M key to bring up a map and instantly travel to places that you have already been. There is also a neat feature whereby you can draw a line of your intended path on a small map view upper right in the screen, so that other team members can see where you are headed and keep on track.

At the market places you can see others who are online and chat to them if you wish, but once you head out into an area you have only the members of your team (CG or real). This means no interferance by aggravating kill stealers, random people killers, rude commenters etc which can be the bane of online gaming at times. You can set your chat to public or private feed.

One of the stand out points-of-difference about Guild Wars is the fantastic value for money. You buy once and play forever free (except for your ISP charges of course). Not only that, you continue to get updates and seasonal quirky little extras.

I am also impressed with the smooth play speed of the game. Considering the level of detail, the refresh is apparently instant...I do not recall ever experiencing lag or any other gameplay issues for that matter (I should mention that I have a rather grunty high end PC, but I have previously played it on a less grunty one without any lag either).

To think that the same company could do it twice in a row. Guild Wars Factions is another gem of online gaming.

Factions brought:
- Larger environments
- Even prettier scenery and graphics
- New classes that didn't break the game in any way
- New weapons and armor for EVERY class including the ones from the first Guild Wars
- Even more interesting storyline and a horde of quests to plow through

This is one of the few times I've been very impressed by an expansion for a game. ArenaNet are doing a fantastic job, I will be very keen to sink the gaming fangs into Guild Wars 2 when it comes out.

Players can build shipping lanes, which are very similar to roads. Additionally, the game comes with many different water-hex-heavy variant setups.

Part of the Catan Series.