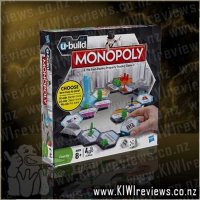 Everything's customizable these days: jeans, sneakers, lipstick and now MONOPOLY too! With a build-your-own track, you're in control of your own game.

Want a quick one? Start with the 30-minute Starter Track. Want a true MONOPOLY experience? Try the 60-minute Classic Track. Once you've mastered those, move on to the Pro and Freestyle tracks for a unique experience that YOU design!

There are so many options, you'll never need to play the same game twice. Do-It-Yourself has never been so much fun!

I have always loved Monopoly, and so when the newer versions started to appear, I was dead keen to give them a go. However, some versions are better than others, and though I loved the concept behind this one, I wasn't as keen on it as some other, more classical, versions.

Now, don't get me wrong, I didn't DISlike this version at all, but somehow it just seemed a little 'rushed through the planning stage" a bit... there are elements that really appeal, such as the two types of buildings, and how you can rearrange the board to suit your desires, evil sense of humour, or sense of fair play... but a couple of the newer 'enhancements' - such as the new idea of railways and the bridges - just didn't really seem to be the best 'fit' for me.

With the board based on hexagonal tiles with small attachment points, it just seemed to be a little fragile to me... as evidenced by the fact that during first playtesting the board got accidentally knocked while one player was reaching for their drink, and some of the attachment clips got snapped off, making those tiles forever 'free-floating' and unable to be fixed to the rest of the 'track'. I would have preferred to have seen either a 'Lego-style' board as per the other U-Build games or perhaps magnetic attachment points to allow a strong join that didn't suffer permanent damage from a rough or accidental disconnection.

The rules were pretty simple to grasp after a couple of laps around the 'board' but it was handy to have the 'reminder' cards on hand for those "Ummm..." moments that crop up every time you learn a new game... especially when you are trying to forget old habits to deal with a new variant of a classic.

Overall, though structurally it had some shortcomings, and there are some bits I wasn't a fan of, the game itself is a lot of fun and one I would certainly play again... but not with kids under 12 years old sorry... it's just too complicated for the little ones, in my opinion. Could make for a fascinating and fun drinking game though, especially with the bridge taxes.

Okay so we've had just about every variation of Monopoly that I can think of, so what's next for the entrepreneurial board game? Well it's a DIY version that's what.

I honestly did not know what to expect when I was first offered the opportunity to review this version of a classic game, but as my oldest son is Monopoly mad (we must have at least 6 or 7 different versions of the game now) I basically had no choice but to say 'Sure i'll review this', of course it doesn't hurt that I quite like the game as well

As one might expect the setting up of this version takes a bit more time than one would usually spend setting up a game. The game comes with designs for 3 pre-defined board layouts, with each giving a different game length (these times must be assumed to be approximate). Of course you aren't restricted to just these layouts and as the name suggests, it's up to you to decide how the board layout goes. Say you don't want the two most expensive properties to be the last ones before you hit 'GO', well then don't put them there, put them somewhere else. How about having 'GO' right next to 'Go Directly to Jail'? Well no problem either.

There is also a change to the 'Chance' system, now you have the addition of bridge tiles as chance tiles. If the bridge tile is down you can pass by it with no problems, but if it's raised then you must pay $1M to lower it. Landing on the bridge acts similar as passing it, but you must then also draw a chance card.

I can see some of these rules being rather confusing to the younger players, so in these games I've chosen to omit certain things like the hazard tiles and the need to pay the bridge toll.

Overall I did like the game despite the fact that I found it a little confusing. The slightly dumbed down for this one, and the ability to modify the game board to an extent, are great features.

What would NZ Monopoly be like if it were invented today...?

New Zealand has changed over the last few decades. This special anniversary edition celebrates 21 years of NZ's favourite boardgame, with a modern day equivalent that was voted and chosen by New Zealanders.

Choose from a range of new tokens, including a mobile phone, jandals, sheep or even a jar of Vegemite!

Rents have skyrocketed all ... more...