Ripley's Believe It Or Not! Special Edition 2011 review 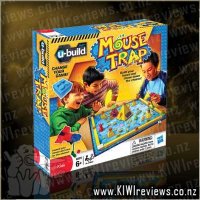 You build the game! Assembly is only half the fun as you build your game, Space Boot and Trap. Then, chase down the cheese. Don't get trapped as you search for the cheese in outer space. Collect 10 cheese bricks to win. Play it our way, or change things up! Find ALL of the cheese, customize the gameboard, add in some twists, and make it your own!

Build your board and chase down the cheese!

Never having played the classic version, I can't really comment on how this one stacks up against the classic version, but I can say that this one stands well on it's own merits.
The board is a bit of fun to put together, since you can place the block of "cheese" in almost any fashion you choose, but most of the major board pieces stay static, meaning the rules are fairly easy to follow no matter how you set thing up.
Considering the board is mostly paper and cardboard it is quite sturdy and resilient, unless you get it wet. Hint: Don't let young kids drink near it.
The blocks look very much like Lego, even though they are a different brand. Because of that, if you want to boost the potential score of the game, you can add in your own blocks. They won't have the cool cheese pattern printed on them, but they'll work just as well.
I thought the game was really fun, if a little weird with it's "alien influence", but the gameplay was really entertaining for the kids and gave the adults a great afternoon of laughter and pleasure, even as spectators.
All in all, a fun game for young and old, especially the young.

Right if you've ever played the original Mouse Trap, well forget pretty much 90% of what you remember from that and be prepared to start again.

The basic premise of the game is for your mouse to collect 10 cheese bricks which have been scattered about the playing board (which for reasons which remain unknown represents the moon), and your mouse is piloting a spaceship. Although thinking about it know, given the fact that the moon is made out of cheese, it makes perfect sense

This time in Mouse Trap you no longer have to make your way around the board and avoid getting trapped at the end, instead you can get trapped at any stage, just by the roll of the dice. The dice now has pretty pictures depicting certain actions as opposed to rolling a number, so if you roll a cheese brick then you can move that brick to any cheese space on the board, you then place your mouse on top of 'Cheese Mountain' and with the 'Space Boot' you attempt to send your mouse off flying in the hopes of knocking some cheese bricks out of their holes which you then get to keep. You can also roll actions that allow you to move your spaceship around the board to any landing circles, trap an opponents mouse, or you can roll 'Cheese Mountain' which allows you to use the mountain in a slightly different way to 'launch' your mouse, this method will help improve your chances of getting some cheese bricks.

So while this game is quite different from it's predecessor, I still found it to be a fun and entertaining game and is great for a family games night.