The Temple of Elemental Evil review 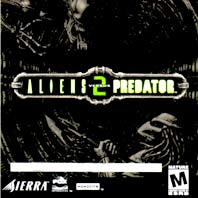 THEY'RE BACK. With a few days to kill...

- Three Sides To Every Story.
Become the vicious Alien, stealthy Predator or combat-hardened Marine, as you unravel a new dimension of the Aliens and Predator universe through three interlocking storylines.

- Intense Internet Multiplayer combat.
Wage epic multiplayer battles over the internet with up to 16 players.

Personally I like this game, mainly because you can play as all three races. The storylines are fairly short, probably about 5-12 hours but considering there are three of them its not that much of a problem.

I've never seen the Alien or Predator movies so I may have enjoyed the game for what it was more than others might. The immersion factor was pretty good with the predators different vision modes and alien wall crawling and "pheremone vision" as well as, for the time, fairly nice looking graphics.

Theres almost no replayability for single player, the missions are very linear with only one way you can go and very minimal bonus areas to find (even when you do its only something like a little extra ammo or some grenades). There are a few times where you will wonder, "where the $%&@ am i supposed to be going", mostly with the aliens.
Multiplayer is fairly entertaining, however I beleive there is no longer any official servers and the online factor of the game is run by fans.

Controls are nice and easy to pick up, and fully remapable to anything you feel like (great for avid gamers who are used to a particular type of control setup), joystick support included for those odd enough to prefer controllers over keyboard and mouse for FPS games.

Unfortunatly the game has issues with a fair few nVidia graphics cards (nothing game breaking, but irritating at times) and the latest patch for the game dosent seem to work with windows xp at all, youll have to use v1.0.9.5 (dosen't happen with everyone, but it is quite common).

The game is fairly challenging, especially the expansion, and has a nice difficulty difference between the 4 modes, hardest one being you get no saving only checkpoints.

I received this game as an added bonus to a christmas gift last christmas, so I can't really comment about value for money. But, having played it once (or tried to, but I will get to that later), and also doing some research locally on retail value on the game, I would have to say I doubt I would have gone and purchased it myself.

Graphics were good, storyline (for those who know the 'Aliens' & 'Predator' movies) was a little far-fetched in my opinion.

I had more than a few inconsistency problems between system requirements and capabilities of my system, which I'm sure is why I had so much trouble achieving a smooth game-play.

Score: 9.5
Product reviews for listing 3822: Lego The Lord of the Rings -  Developed by Travellers Tales