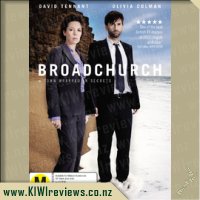 Disclosure StatementFULL DISCLOSURE: A number of units of this product have, at some time, been supplied to KIWIreviews by Roadshow (NZ) Ltd or their agents for the purposes of unbiased, independent reviews. No fee was accepted by KIWIreviews or the reviewers themselves - these are genuine, unpaid consumer reviews.
Available:
July 2014

The small coastal community of Broadchurch is rocked to its core when 11 year old Danny Latimer is found dead on the beach in suspicious circumstances. A police investigation commences headed up by the new Detective Inspector (David Tennant) and the local Detective Sergeant Ellie Miller (BAFTA award winning Olivia Coleman).

A previously naive DS Ellie Miller is forced, with the help of DI Alec Hardy who trusts nobody, to start viewing her town through suspicious eyes as secrets and hidden histories are exposed.

My wife booked this to record quite a while ago and it has been hanging around on our MySky ever since, but a couple of nights ago we finally managed to sit down and watch the first series over two short nights (had to get the kids to bed first).

I really enjoy a good crime show, but usually the crime is solved within an hour, sometimes over two hours, but no usually a whole eight hours, so I was a little worried that I wouldn't get caught up in the show and end up not really paying attention to it. However, this wasn't the case and I found myself really drawn into it, the characters were really well thought out and acted, there was nothing about the characters that I didn't believe in, from the shadiness of some to the vulnerability of others.

Young Danny is found murdered and we get two main story lines, the ensuing investigation and the family who needs to learn how to live without their son/brother. Throughout the series though we get titbits about those who live in the small town showing that most people have something to hide. Everything in this is really well done and I didn't guess who the killer was until the final episode.

I saw this advertised on websites and thought it would be something worth watching so when I saw the 'coming soon' ads on TV I kept an eager eye out for the airing date and set the MySky to record once I knew when exactly it would be on. That being said, with all the other shows I was watching and not always have the chance to watch it, it has taken until yesterday to finally sit down and watch it, 8 episodes in two nights.

When local eleven year old boy, Danny, is found on the beach, it is soon discovered that he was murdered and so begins a murder investigation that will shake up the entire town. We have the tension in the police department as a new DI joins the force, we have his history, and the history of various members of the town revealed as we go through the series, uncovering secrets thought well hidden and pasts that people are trying to escape, but as they say there is never really any escape from our past.

The acting is superb, from the young boys in the show, to those portraying the family of young Danny and what they are going through to every other single character in the show. I didn't find that any of the characters felt fake, it all felt real and you could really feel for the characters, even the ones that you are made to feel distrust for and then things flip and you feel a bit sorry for them.

I'm keen to see season two as I hear that even though there will be a murder, the fallout from the events of season one will be the ,main focus as the town attempts to heal from the giant wound Danny's murder has left.

I don't tend to watch a lot of UK programmes, I don't know what it is about them I just usually don't enjoy them. After hearing all the hype about Broadchurch though I decided that I needed to give it a go. I'm so glad as I loved it and found myself hooked within moments. At the end of each show I found myself hanging out for the next weeks show. Since it has been released on DVD I have since watched it again with my husband who missed it the first time around. I enjoyed it just as much the second time around.

The setting for the show was just perfect, as was the storyline and the actors selected to play all the roles. David Tennant and Olivia Coleman just shone in there roles of the lead detective investigating the death of a 11 year old boy in a quiet seaside town.

I love programmes that keep you guessing and right from the start Broadchurch did this. Just when you thought you might of worked it out they threw something else in which makes you go hmm. You will then find yourself questioning everything and changing your mind on who did it. I had narrowed it down to two people by the end but there were still some surprises for me when the killer was unmasked.
I'm already finding myself hanging out and waiting for season two!

I had read lots about this series and was eager to watch it. But when it finally reached our shores it was on TV1 and we were already MySkying two other channels and watching one on the Sunday night so I was guttered when realised was going to miss it. However, two weeks later an encore was screaned on Saturday night so we got to sit down and watch the first two episodes. We enjoyed so much that actually started watching live on Sundays - ads and all.

Now I am the first to admit that I am not a huge UK fan, would much prefer American programmes, so I was somewhat hesitant about watching this. However I was hooked after the first twenty minutes and could not wait to view the entire series.

In short a young boy is found dead on the beach and naturally they need to find out who the killer is. Each week its a bit of a roller coaster as a few of the towns people are brought into the lime light. You are left changing your mind left and right who the murderer is before the final chilling episode finally reveals the killer. I had my suspects narrowed down to two after the first four weeks and then eliminated one of them and locked in my suspect.

I was right, much to my husbands amazement but I was left with my mouth open when it was revealed the reason behind the killing, and could not believe or understand why - weird!

I found this series riveting, the acting, scenery, script everything was done perfectly. The parents of Danny left you teary eyed and that stunning conclusion actually had me in tears when the wife of the killer found out. Truely outstanding acting. This is one of those series that everyone should watch - its suspenseful and the characters are so real. Well worth eight hours of your life.

When Broadchurch was advertised as coming to our New Zealand TV screens earlier this year, I could not wait to watch it. Unfortunately it aired on TV 1, a channel I rarely watched, which also means I forgot it was on and in turn missed it starting. Because of this I did not tune in for the rest of the season. So when KIWIreviews called for reviewers for season 1 on DVD I immediately put my name forward and was so stoked to get selected.

I had kept away from all chit chat surrounding the programme so was still none the wiser as to what happens or who did it. Broadchurch is a classic who done it show, but it is so brilliantly written, so amazingly presented, that you are left guessing the whole way through. Each episode focuses on a different member of the community and the acting and storyline are so superbly presented that almost every single person shown looks guilty in some form, even the lead Detective Inspector comes across as guilty.

The show is set in a beautiful seaside town that is perfectly matched to the storyline. The actors themselves are some of Britains finest and do an amazing job. The show is full of suspense, anguish, grief, wondering and as a viewer it is easy to place yourself right in the midst of it all. As a parent you are left feeling somewhat how Dannys parents must fee: confused, angry, lost, sad. It is a true emotional rollarcoaster and if you are the type of person who crys during movies you will definitely shed a few tears while watching this.

There are 8 episodes on 2 discs and a 3rd disc of special features. I sat and watched the entire season in one sitting. It was not what I had planned, but I could not walk away. I needed to see justice done for Danny. I had picked a few suspects but all were wrong. Midway through the season I picked the right family but was wrong in the person I suspected. I was shocked when the clue was finally given and you realised exactly who the murderer was. I was even more shocked as to why Danny was murdered :(

At the conclusion of the season I was left with a few unanswered questions that I am hoping there will be further seasons that will answer these questions for me. Broadchurch is an amazingly presented, extremely powerful, truly awesome show. Absolute brilliance at its best. I highly recommend it and as a DVD set it is definitely worth purchasing and most definitely worth the price. I am glad I got to review the season on DVD because I think it would have driven me crazy having to wait each week for the next show to air lol

The Epic Conclusion of the First Season

Outlander spans the genres of romance, science fiction, history and adventure as it follows Claire Randall, a married WWII combat nurse who mistakenly falls back in time to 1743.

As the season continues, Claire and Jamie's relationship is tested and Claire must reconcile her modern mindset with this 18th Century world. Ruthless Redcoats, volatile clan politics and brutal witch ... more...