« The Book of Tomorrow review 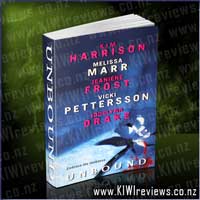 Disclosure StatementFULL DISCLOSURE: A number of units of this product have, at some time, been supplied to KIWIreviews by HarperCollins or their agents for the purposes of unbiased, independent reviews. No fee was accepted by KIWIreviews or the reviewers themselves - these are genuine, unpaid consumer reviews.
Available:
November 2009

Five masters of Dark Fantasy cross the borders between our world and others.

Not all hunters are bound by human laws...

Revisiting the paranormal realms they've made famous in their wildly popular fiction, bestselling authors Kim Harrison, Jeaniene Frost, Vicki Pettersson, Jocelynn Drake and Melissa Marr unleash their full arsenal of dark talents, plunging us into the shadows where the supernatural stalk the unsuspecting... and every soul is a target.

Get ready for the ride of your life, because the wildest magic has just been unleashed and evil is about to have it's day...

This is an excellent collection of fantasy stories based on the hidden Underworld model, with Vampires, Werewolves (or Lycanths), and the other assorted Undead menagerie. I admit that not being a great 'fantasy' genre fan in the past, I haven't come across these authors much, though the names are familiar from the bookshelves of fantasy readers I know. However, now that I have read these tasty tidbits I will be keeping a wary eye out at any second-hand bookstores I visit.

The styles are all different, yet there is a common 'vibe' running through this book that keeps it a cohesive read, even when the characters are so utterly dissimilar. Ranging from a thumb-sized pixie who has a new calling as a general fix-it man for the faeriefolk, a vampire with a killer on the loose and a cohort waiting in the wings for her to stuff up so he take her back to her origins, to an pre-transformation glaistig who doesn't want to follow the family line, there are characters that will appeal to almost any fantasy reader... and a few who don't yet realise they are fantasy fans.

I would be very hard pressed to say "This one is my favourite of the five..." because they all hold some excellent points, each in a different way... but if I simply had to pick one, it would have to be "The Dead, The Damned and the Forgotten" by Jocelynn Drake, as it is the sort of tale I could easily see being converted to a TV series or film script. I had to have a giggle at "Dark Matters" by Vicki Pettersson, as it runs along an awfully familiar theme, that of the movie "Night Watch" - Two warring sides, hidden amongst mortal humans, each fighting a standing battle while waiting for the arrival of a superior being who will tip the balance in favour of whichever power they side with.

Overall, this is a great little sampler for those new to fantasy, and a bit of an eye-opener to those who have always dismissed this genre as "fairytales and dragons".

This book is about putting your design ideas on paper for others to enjoy. Recent developments in computer rendering technology have put amazing new tools in the hands of designers. But for communicating emotion and character, there is simply no replacement for good old-fashioned hand drawing. Jim Leggitt's Drawing Shortcuts gives you an ingeniously ... more...