Every Which Way But Dead review 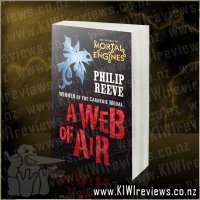 Two years ago, Fever Crumb escaped the war-torn city of London in a travelling theatre. Now she arrives in the extraordinary crater city of Mayda, where buildings ascend the cliffs on funicular rails, and a mysterious recluse is building a machine that can fly.

Fever is the engineer he needs - but ruthless enemies will kill to possess their secrets.

This is the fabulous sixth book in the "Mortal Engines" series, from the brilliant and award-winning Philip Reeve.

Another prequel to the classic "Mortal Engines" series, this is a direct sequel to Fever Crumb and reunites us with the brilliant young engineer, illegitimate daughter and heir to the memories of the now-dead Skriven lord, Auric Godshawk, who once ruled London with an iron fist, and whose dream of mobilising London is now underway thanks to the efforts of Fever's mother, Wavey Godshawk, and the Guild of Engineers under the command of Quercus, who now rules London.

In this gripping tale we meet Fever as she approaches te crater-bound city of 'Mayda at the end of the world' - built in and around the crater formed by a weapon blast in the ancient war that almost erased humanity from the face of Earth. With a predominantly seafaring trade economy, the city has a strong sea-goddess-worship religion that seems to be faltering, and an eccentric character - Arlo Thursday - who was raised in a ship-building family but dreams of flying like the 'Angels' - a race of semi-sentient avians with grasping hands and a long-buried culture of map-making, dwelling-construction, and conversation.

After a freak tidal wave wipes out Arlo's family, he bonds with his 'Angels' even more and after an apprenticeship in a Maydan shipyard, becomes a 'crazy hermit' in his family's old home in Mayda, there to continue his solo work on powered flight. Think 'MacGyver' mixed with 'Wright Brothers', and a hefty dash of 'crazy old coot' thrown in for spice. When Arlo and Fever are brought together, the dreams of flight suddenly seem a lot less unrealistic...but their passion for the dream is under threat by the machinations of a mysterious assassin who seems to be trying to remove the knowledge of flight from the face of the world.

Overall, this is a stunning novel on it's own, and though it features a couple of the key characters from the previous title, it just doesn't really 'feel' like a 'Mortal Engines' tale to me - there's nothing in here that leads directly towards the creation of 'Municipal Darwinism' - in fact it clearly sets everything back a generation or three. We don't even get another showing of the Stalker - Shrike - that featured so prominently in all the other books - in fact he gets a brief mention just once, and even that only in passing. None the less, as I said this tale is a great read in it's own right, even if it does feel more like a side-story than part of the main chain.

November 1973. Professor Periklis Harvatis, working alone and late into the night on and important archaeological dig, unearths a magnificent golden vase upon which the enigmatic images of a long-lost second Odessey are engraved, showing the mystery of Ulysses' final voyage. But in the bleak chamber where he finds it he sees something so frightening that less than seven hours later, a broken man, he is dead... but not before he has ensured the ... more...